Capping off a day that begun with news that 598,000 jobs were shed in January, raising the unemployment rate to 7.6%, a bipartisan deal was reached between Senate Democrats and moderate Republicans that will clear the way for an economic stimulus package to be passed by the Senate.

The NY Times reports, "The fine print was not immediately available, and the numbers were shifting. But in essence, the Democratic leadership and two centrist Republicans announced that they had struck a deal on about $110 billion in cuts to the roughly $900 billion legislation — a deal expected to provide at least the 60 votes needed to send the bill out of the Senate and into negotiations with the House, which has passed its own version."

Politico says that "at least three Republicans are expected to back the revised bill: Sens. Susan Collins and Olympia Snowe of Maine and Arlen Specter of Pennsylvania." Collins said, "Is it perfect? No. But this bill is an enormous improvement. The American people don’t want to see partisan gridlock. They don’t want to see us divided and fighting. They want to see us working together to solve the most important crisis facing our country.” 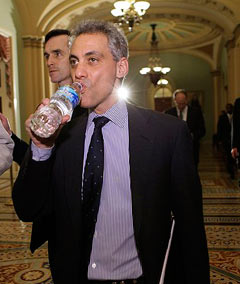 President Obama dispatched his chief of staff, Rahm Emanuel, to a meeting between Senate Majority Leader Harry Reid, Specter and Collins. Collins told the Washington Post that before Emanuel arrived, Democrats were only offering $63 billion in cuts to the package, "Then Rahm got involved, and a much better proposal came forward." Here's a list of the cuts.

It's believed the Senate vote may be on Monday. However, House Speaker Nancy Pelosi wasn't thrilled with the cuts, noting they "do violence to what we are trying to do for the future"; the WaPo reports, given the House Dems' reaction, "Congress's self-imposed Feb. 13 deadline to send the bill to Obama's desk remains in doubt." Still, Pelosi issued a statement saying, "Despite differences between the House and Senate versions, Congress is committed to sending the President legislation to create or save over 3 million jobs and begin to put our country back on the road to recovery."