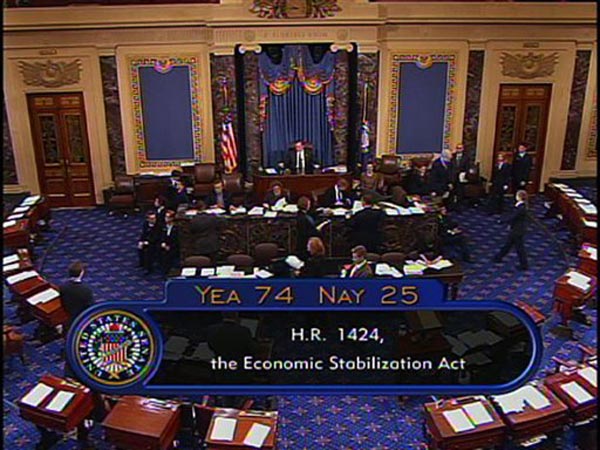 Tonight, the Senate passed the $700 billion bailout package, with 75 votes for and 24 votes against (the bill needed 60 votes to pass; Ted Kennedy, who has been battling cancer, was absent). The NY Times reports the passage left "backers optimistic that the easy approval, coupled with an array of popular additions, would lead to House acceptance by Friday and end the legislative uncertainty that has rocked the markets."

President Bush was pleased with the Senate's action, "They worked across the aisle to make vital improvements to the rescue package I sent Congress last month - including an expansion of deposit insurance that will help protect the savings of American families and small businesses."

The Senate added some other elements to the original bill, which was rejected by the House on Monday; here's what the Senate added, per USA Today (which has more details):

You can read details of the bill here. The bill's details have grown: Treasury Secretary Henry Paulson offered a 3-page bill initially; the House's bill was 110 pages; and the Senate's is 450 pages. House Speaker Nancy Pelosi said, "“Times of crisis demand decisive bipartisan action and I welcome Senate passage of the economic rescue plan. The House will act in a bipartisan way to restore market confidence as well as Main Street’s confidence in our economic future."

And both Barack Obama and John McCain--as well as Joe Biden--were on hand for the vote and the two presidential candidates shook hands.

#bailout
#economy
#financial crisis
#senate
Do you know the scoop? Comment below or Send us a Tip