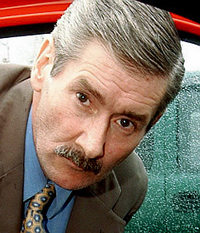 A middle-aged man held several workers hostage at Sen. Clinton's New Hampshire campaign office in the town of Rochester yesterday, before surrendering to police. The alleged bomb he had taped to his chest turned out to be simply a number of road flares. Leeland Eisenberg's motivation for seizing Clinton's field office is unclear, but he appears to be a disturbed individual. The New York Times declined to speculate on Eisenberg's purpose ("[Police] would not discuss Mr. Eisenberg’s motive or mental state,") but the New York Post did ("crazed,") and the Daily News headlined with an assessment ("He was wacko.")

After five hours and a few released female hostages, Eisenberg surrendered to a police SWAT team, lying face down on the street as he was handcuffed. Rochester, NH is about 70 miles north of Boston and came to a halt yesterday. Area schools were locked down (bummer on a Friday, no doubt) and the campaign offices of Sens. John Edwards and Barack Obama were evacuated. According to the Times, the police in NH were familiar with Eisenberg, who allegedly had a record of spousal abuse, substance abuse, and what sounds like paranoid behavior.

The authorities would not discuss Mr. Eisenberg’s background but suggested that they had encountered him before. Several news media outlets reported that he drew attention last spring when he complained that his constitutional rights had been violated after the police placed a flier in his unlocked car, warning him to lock it. 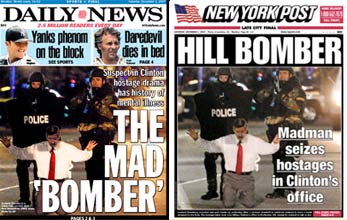 The hostage taker apparently called CNN during the ordeal, although the cable network didn't report that call during negotiations. Sen. Clinton said that she thought Eisenberg "was seeking help" and “because he thought he might get some kind of relief from his own pain and suffering.” The Daily News reports that he was requesting cigarettes, alcohol, and Pepsi.

Clinton released a statement saying she was glad the incident was resolved without harm to anyone and noted the dedication of her volunteers, "every four years extraordinary young people come to places like New Hampshire because they want to change our country. They believe in our future. They work around the clock. They are so committed to their cause and I just want to commend every one of them from every campaign who really makes what is a sacrifice and a commitment."