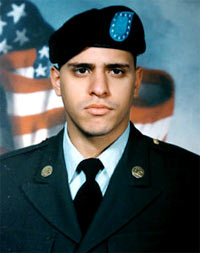 Last week, Jonathan Aponte admitted to paying a man $500 to shoot him in the leg so he wouldn't have to return to Iraq and his unit. The physical pain of his injury was augmented by the pains of embarrassment when people complimented or thanked him for his service in the Army as he was transported back to Fort Hood in Texas.

While he's facing criminal charges of conspiracy and falsely reporting an incident in New York, the Army has first crack at him, however, and the Daily News has an article detailing his travels back to his unit in Texas (it also seems like the reporter accompanied him on his journey).

Escorted by another soldier, dressed in fatigues, and hobbling on crutches, Aponte appears to be just another wounded veteran of the wars in Iraq and Afghanistan. As such, he received well-wishes from strangers who didn't know that he and his wife hired a man to shoot him on a Bronx street in an effort to get out of further service. The driver of the shuttle bus to his gate at the airport thanked him and told him to "hang in there." After Aponte boarded his flight, the embarrassment became acute, with the JetBlue captain announcing his presence on the flight followed by applause from other passengers, and a little boy telling him, "Thank you for your service." Aponte was uncomfortable with the attention and told the Daily News, "I don't feel a hero at all."

It's probable that Aponte may have received similar thanks and encouragement if he actively identified himself as the soldier who paid someone to shoot him so he wouldn't have to return to Iraq. Aponte wasn't advertising that fact, though, and traveled back to Texas fearing a court martial and imprisonment. He hopes a grand jury will go easy on his wife and the man who shot him, saying that he was confused and that he just couldn't bear returning to serve with his friends in a violent country.