Self-Pitying City Council Committee Argues For Giving Itself A Raise

The City Council's Committee on Governmental Operations convened today and its members took a bold stand, collectively arguing that, yes, they should receive raises, yes the City Council should agree to reforms long advocated for by good-government groups, and yes those raises should be $10,000 more than a mayor-appointed commission recommended. The hearing came after last week's surprise announcement that several pieces of salary and reform legislation had been drafted in secret, and would be voted on this Friday. Council committee meetings are often sparsely attended by their members, but for a time this one was a full house, once everyone made it in, anyway.

10 a.m. hearing of @NYCCouncil members to give themselves a pay hike is late; most of the pols are not here yet. pic.twitter.com/w56jJ8vI4m

The plan being discussed in public for the first time would grant Councilmembers $36,000 raises while banning outside income and eliminating stipends for heading committees, which can run as much as $25,000 a year and give the Council speaker substantial power over other members. The mayor is supposed to appoint a panel to study the issue of raises for Councilmembers as well as other citywide politicians, borough presidents, and district attorneys once every four years, but the last time the so-called quadrennial commission convened and the Council voted on raises was in 2006.

Citizens Union director Dick Dadey testified that his organization supports the package of reforms, but said the lack of public input "actually tarnishes what you're trying to do here."

No Councilmember addressed this substantively, but Park Slope Councilman Brad Lander offered this: "Maybe we could get it even better if we debated it even longer, but I think we’ve gotten it pretty good at this time."

Washington Heights-Inwood Councilman Ydanis Rodriguez was the most vocal about the main issue addressed: just how deserved this round of proposed raises is. Speaking to members of the panel that proposed salaries $10,000 shy of the $148,500 the Council proposed for itself, Rodriguez said members had earned more yet.

Noting that he often attends meetings in the evenings and misses spending time with his family, Rodriguez said he understands issues faced by "the 99 percent," but that his duties are complex and easily on par with executives running large organizations.

"I would be proud to go to my constituents and say—it’s public record—this is what I make...Show me an executive director in New York City who makes less than $150,000."

@GloriaPazmino @ydanis yep, its hard to work an actual job for over 60 hours a week, support a family and sacrifice for them.Welcome to life

Those positions are actually not so hard to find, in the nonprofit sector, anyway. The 106 respondents to a Payscale.com survey of executive director salaries in the city averaged just $87,918. A more expansive survey by Professionals for Non-Profits (PDF) included more than 1,200 organizations in the New York City area. That survey's lowest-paid executive directors averaged $110,000-$130,000, but only groups with annual budgets over $10 million had a low-end director salary of $150,000.

In one exchange, Rodriguez demanded that the mayor's commission acknowledge the Council's ultra-hard work.

"Can we agree that the commission recognize that the Council works even more than full-time?" he said. "In the report it says most Councilmembers work full time."

Panel member Paul Quintero pointed out that no one from the Council had provided time sheets when his group was preparing its recommendations. Still, he allowed, "in general, it was our impression that absolutely you are working long periods of time."

Chinatown Councilwoman Margaret Chin pressed the point, too, saying, "the way I look at this job, I have many full time jobs. This is more than full-time."

She said that the raises, and the reforms aimed at reducing graft, would "finally [give] this body the recognition it deserves."

Whatever the case, it seems like Council staffers are the ones who could really use a raise. In Rodriguez's office, for instance, one legislative aide made just $27,503 last year, and his chief of staff, his highest-paid worker by far, $56,231, up from $30,000 the year prior, according to records compiled by SeeThroughNY. Few positions in his office break the $40,000 mark, records show.

Two of East New York Councilwoman Inez Barron's aides attended in their "personal capacity" to call for raises for staffers. Barron's chief of staff Joy Simmons also stated that Councilmembers and staffers had enough work to do without responding to residents' myriad complaints and recommended that in addition to getting more money, they "should get out of the business of dealing with constituent services."

Several Councilmembers expressed support for paying their staffers more, though the issue was outside the purview of the commission and they didn't bother to include it in their legislation. A few gently opposed the idea of offloading constituent services. 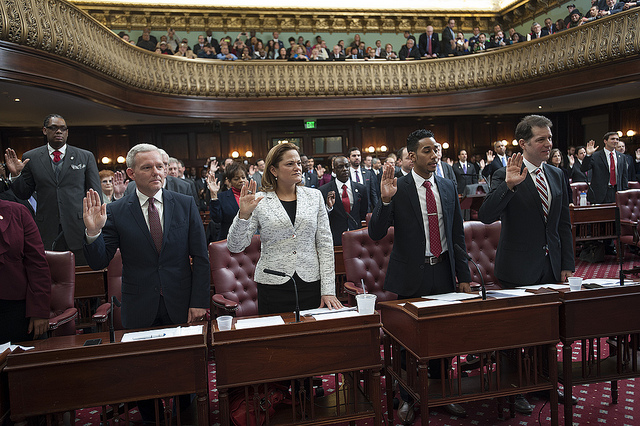 It's not easy being a City Council member, but then again neither is being a school teacher. (New York City Council/Flickr)

One of two everyday New Yorkers who testified said that the Council ignoring the commission's recommendations and bumping up its raise shows why it should be stripped of that power.

"The Council should not vote on their own raises," Roxanne Delgado said. "Because human nature, greed, will always get the best of them."

Responding in part to the Daily News's "Shitty Council" front page comparing a supposed Council plot calling for $192,000 salaries to 1 percent raises for cops and 2.5 percent for firefighters, East Flatbush Councilman Jumaane Williams said that "the uniformed services deserve all the raises they can get," but because those workers get salary bumps year to year, the comparison doesn't work.

"I realize in discussing raises for public officials there is no amount of facts that will go against the public’s emotions," he said, adding later that people sometimes view Councilmembers as "non-human."

Harlem's Inez Dickens, who has made headlines for atrocious conditions and unpaid fines at apartment buildings she co-owns with her sister in Harlem, and for failing to report rental income, quizzed panelists on what would qualify as "passive income," allowed under the new rules, and demanded to know whether the commission had considered money she and others have paid out of pocket to constituents, such as for a murder victim's burial. Her income would be allowed, so long as someone else was managing the buildings. She went on:

Last time I looked we pay the same high rent as our constituents, because if we took a rent reduction [the Conflict of Interest Board] would give us a penalty. If we go to school we pay the same tuition. I don’t think we should be penalized for being public servants.

“do you know how many times I have written a check" https://t.co/AvhqJHdKxs

The Council is set to vote on the raise package on Friday, alongside Mayor de Blasio's secretly hatched and widely criticized deal to move carriage-horse stables into Central Park and ban pedicabs from the southern portion. The mayor must sign off on the raises, and the Council must approve the carriage deal—and next week, the mandatory inclusionary zoning that is the cornerstone of the mayor's affordable housing plan. The timing prompted the Daily News editorial board to call the raises "daylight bribery."

Despite his passion about the issue of raises, Councilman Ydanis Rodriguez did not stay for all of the four-hour hearing. He was not the only one.

"We actually have multiple members who stayed for the entire hearing.That is incredibly rare"-Council that works so hard it needs a raise

#citizens union
#City Council
#ethics reforms
#good-government
#quadrennial commission
#raises
Do you know the scoop? Comment below or Send us a Tip