Getting to and from the airports around town is not necessarily an easy or cheap proposition. JFK at least has the AirTrain (though this isn't a good month for it), but LaGuardia doesn't (and won't be getting one anytime soon). However, the Department of Transportation and the MTA today announced that you can at least expect a Select Bus Service bus to roll up to LGA as soon as next year. Which is a start.

The two agencies, along with Mayor Bloomberg, today announced three potential routes that have been identified for the service that will connect three boroughs, adjacent subway lines, the two commuter railroads and LaGuardia Airport with "more direct and reliable service to the airport."

According to the city agencies, the new routes would potentially offer between 10 and 40 minutes in saved travel time thanks to SBS perks like paying before you board, bus-only lanes and the just-being-tested out 'transit signal priority technology' that keep buses from getting stuck at traffic lights."LaGuardia Airport is a transportation hub and a city unto itself that needs a better connection to the transit network and the region’s economy," Commissioner Janette Sadik-Khan said of the announcement. "These routes will open the terminal doors to new neighborhoods and bring more reliable local service to people across three boroughs." 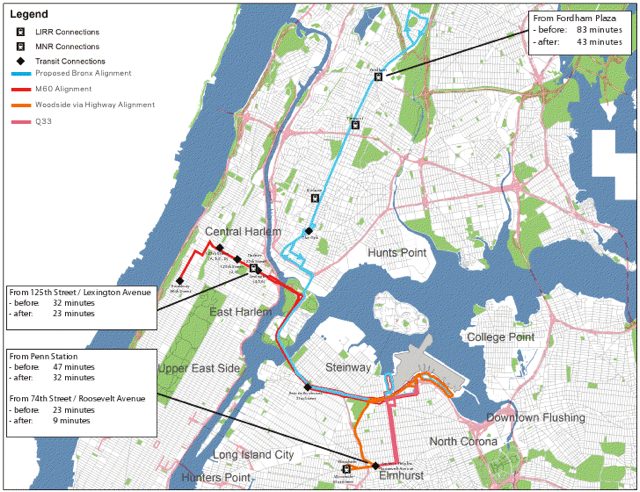 The actual process of "defining and refining" the three exact routes, stop locations and service features started last night in a public meeting in Jackson Heights and will continue for the next few months until the new lines actually appear. And then your trip to the airport will hopefully be that much smoother.

#airtrain
#bus
#dot
#laguardia
#laguardia airport
#MTA
#sbs
Do you know the scoop? Comment below or Send us a Tip