Seinfeld, Responding to Lawsuit, Says It Was Just a Joke 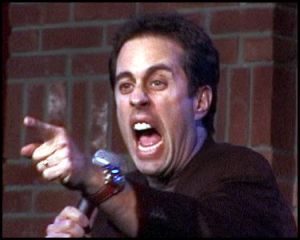 Lawyers for Jerry Seinfeld insist the comic was just joking when he described "Sneaky Chef" author Missy Chase Lapine as a "wacko" for accusing his wife of plagiarism. Lapine is currently suing for trademark infringement because she says Jessica Seinfeld’s hit book about sneaking healthy food into kids’ snacks, called "Deceptively Simple," contains too many similarities to "Sneaky Chef" – and it was published by HarperCollins, who twice rejected Lapine’s pitch.

While appearing on Letterman’s TV show last October, Seinfeld declared, “I have wackos, you have wackos. And, you know, if you read history, many of the three-name people do become assassins. Mark David Chapman. And you know, James Earl Ray. So that's my concern.” On E! he dismissed Lapine as a "nut job like the guy I went to college with who claimed I stole the whole TV series from him." In response, Lapine added a defamation lawsuit against Jerry to the mix.

In papers filed in Manhattan Federal Court, Seinfeld’s lawyers brush off the comments as “overstatements of opinion for comic effect” and point out that “the idea of sneaking healthy foods into a child's diet is not original.” But Jerry should know by now that words can hurt; after all, in Seinfeld episode 169 his own lawyers fired off a Cease & Desist letter to shut down Sally Weaver’s hit one-woman show Jerry Seinfeld is the Devil.