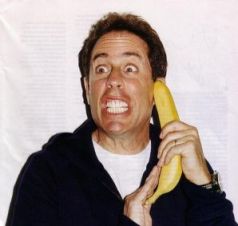 Jerry Seinfeld’s lawyers urged a judge yesterday to throw out a defamation lawsuit brought against him by litigious cookbook author Missy Chase Lapine. In addition to suing Seinfeld’s wife Jessica for plagiarizing her book about sneaking healthy food into kids’ meals, Lapine has also sued Jerry for slander after he likened her to an assassin on David Letterman's show: "If you read history, many of the three-name people do become assassins. Mark David Chapman and, you know, James Earl Ray. So, that's my concern."

Lawyers insist Seinfeld was exercising his First Amendment rights on the show, and that “any statements Lapine perceived to be derogatory were made while he was in comedian mode,” according to court documents obtained the Daily News. They also object to the plaintiff’s characterization of Seinfeld as “a well-known actor” – his lawyers say Seinfeld is a comedian, and display a brazen willingness to perjure themselves for the Bee Movie star.

In defending herself in the copyright-and-trademark-infringement lawsuit, Jessica Seinfeld claims that the concept of sneaking veggies into children’s meals is so old that it's no longer protected by copyright laws, having been explored in such cookbooks as 1971's Confessions of a Sneaky Organic Cook ... Or How to Make Your Family Healthy When They're Not Looking! The Seinfelds also accuse Lapine of suing them just to boost sales of her sequel, The Sneaky Chef - How to Cheat on Your Man (In the Kitchen!). Buy it here for $11.61!