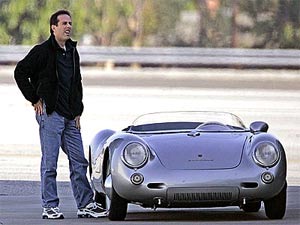 Comedian and car enthusiast Jerry Seinfeld managed to walk away "without a scratch" after his 1967 Fiat BTM flipped in East Hampton over the weekend.

According to the Post’s account, Seinfeld was alone behind the wheel and was about to merge into highway traffic when the brakes gave out. He then tried the emergency brake, and that failed, too. Drenched in flop sweat, the Bee Movie star cut the wheel to the right and "the car rolled over,” coming to a stop “yards from the intersection.”

Police say he was not drinking and said the accident was caused by mechanical failure. Seinfeld found the brighter side, "Because I know there are kids out there, I want to make sure they all know that driving without braking is not something I recommend, unless you have professional clown training or a comedy background, as I do. It is not something I plan to make a habit of."

The comedian (pictured with a Porsche) has an extensive collection of cars, even storing a few in a multi-million garage/car temple on West 83rd Street. He is apparently selling his 1997 Porsche 911 Turbo S for $225,000. No word on if it includes a pencil with Jon Voigt's teeth marks.

#car
#east hampton
#fiat
#jerry seinfeld
#Porsche
Do you know the scoop? Comment below or Send us a Tip