SEE IT: MTA Board Member Parks Illegally After Blocking Bus With Benz

One MTA board member was introduced to the concept of a bus on Thursday, when he and his Mercedes Benz were rudely booted from a prime stretch of pavement by one of those unsightly trundling wagons sometimes used by New Yorkers who don't own luxury sedans.

A tipster tells us MTA board member Charles Moerdler was spotted blocking bus traffic at Greenwich Street and Battery Place on Wednesday, a few hours after yesterday's MTA board meeting. According to the witness, who requested anonymity because they did not want to cross a powerful board member, Moerdler did not seem to notice when a bus that had pulled up behind him insisted on turning left.

"He sat oblivious as the express bus driver honked, and only moved when a concerned passerby let him know he was obstructing the express bus, snarling the intersection, and asked him to move," a tipster tells us.

We're told the MTA board member soon established a new Charles Only Zone nearby. According to the tipster, "he pulled up just far enough to allow to bus to make its turn, and then moved to a different area of the no standing zone. He was, quite literally, obstructing NYC public transit progress."

Reached for comment, Moerdler insisted he was idling for "only a moment" or "all of two or three minutes," so that he could pick up his grandson, who works nearby. He says that he moved to the illegal curbside spot after "hearing a honk," adding that, "My only other option was to double park, which is exactly what I didn't want to do."

"If you had a car, you know that when you open the door, it takes time," he explained. 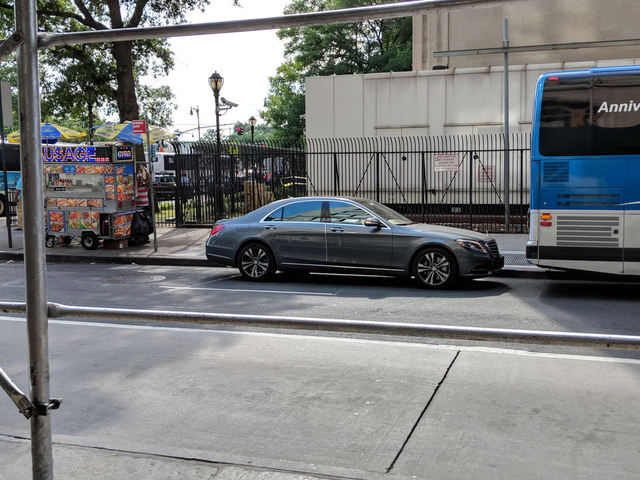 People who do not understand the dearth of options faced by private car owners might be tempted to note the board member's history of turning city streets into his exclusive pied-à-terres. Back in 2012, Moerdler reportedly waved his MTA-issued placard at a Cornell Club employee, informing him that he'd be leaving his Mercedes (a different one, it appears) in the hotel's loading zone. While Moerdler claims the car was left there for a only a few minutes, camera footage viewed by MTA Chief and Moerdler-nemesis Joe Lhota allegedly shows that it was actually only a few hours. (He blamed his grandson in that instance, too.)

Not long after the incident, Lhota reportedly blew up at Moerdler, urging him to "be a man." And while we can't know exactly what Lhota meant by that, it seems fair to assume at this point that Moerdler's idea of manliness involves treating the streets of New York City as both a personal racetrack and a private driveway:

Hey look @JoeLhota! Your buddy Chuck Moerdler is using his @MTA Board Member ID to steal metered commercial parking. No taking the failing transit system for him!

#NY_CPM has been queried 1 time.

If only you had a fancy car, then you too would be qualified to make informed decisions about the public transit system that impacts millions of commuters. Thankfully board members like Moerdler are uniquely qualified to make sure that when the L train shuts down, there won't be too many buses out there gobbling up precious Benz parking.

#charles moerdler
#cuomo's mta
#governor cuomo
#joe lhota
#MTA
#we the commuters
#original
Do you know the scoop? Comment below or Send us a Tip