See How Temperatures In Manhattan Differ From Block To Block

As temperatures briefly return to their normal levels of late-August misery, WNYC ran a feature this morning on a recent study that was able to pinpoint the changes in temperature in Manhattan from block to block.

As part of a City College research project, scientist Brian Vant-Hull guided students across Manhattan observing changes in temperature across different neighborhoods. The project, which took place over two summers, had the students strap on backpacks filled with high-tech thermometers. The sensors, which they carried, had to be covered by styrofoam cups in order to avoid damaging the sensitive instruments.

Their findings showed differences in temperatures ranging within four degrees, with some of the changes directly attributable to geography or man-made structures. While the study is still incomplete, some pretty neat observations have already been made. Lower parts of Manhattan, for example, are warmer than the elevated parts of the city. So the Lower East Side and East Harlem is somewhat warmer on hot days than the Upper East Side.

The researchers also found evidence of a "light box" effect where sunlight reflected off of large all-glass buildings in Midtown can raise temperatures on the street below. For those who've found themselves light-headed and dazed on a Midtown street during the summer, this doesn't come as a surprise.

Another finding, as you can see on the graphic below, is that east-west streets run cooler than north-south streets. 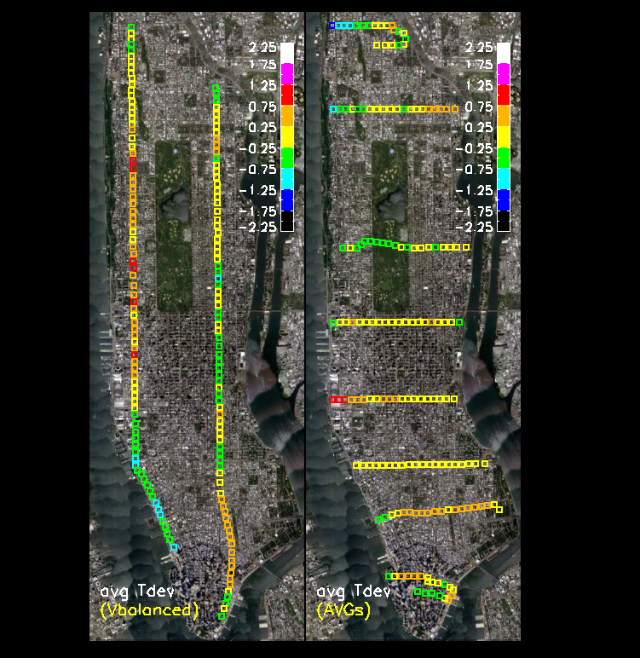 The north-south streets just get more sun than the east-west ones, leading to the rise in temperatures.

#heat
#heat island effect
#microclimates
#science
#temperature
Do you know the scoop? Comment below or Send us a Tip