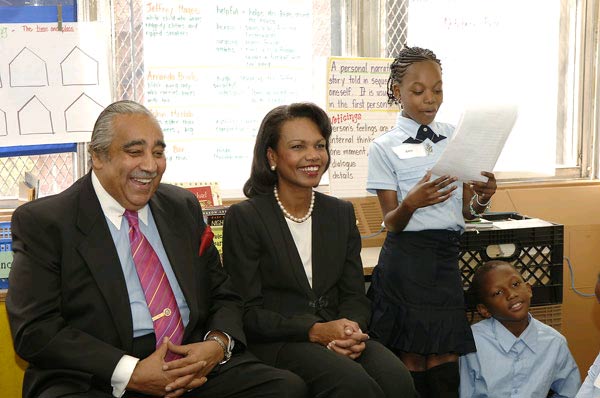 Yesterday morning, Secretary of State Condolezza Rice visited Community School 154 in Harlem. Accompanied by Representative Charles Rangel, Rice, former Provost at Stanford, encouraged the students to dream big, “One thing that I want you to promise me is that you won't let anybody else tell you what it is you ought to be interested in. You'll find what you are interested in and you'll pursue it and you won't let anyone say 'Why would you want to be interested in that? You’re from Harlem.'"

The Daily News had some cute comments from students of the school, also known as the Harriet Tubman School, which has improved over the years:

"She blew me a kiss! And when she shook my hand, I felt special," crowed Illyanna Valentin, 9.

"She's very rich and she speaks Russian and she plays piano!" chimed in her pal Melissa Sealer, 8....

...Third-grader Jamel Dingle, 8, got the message loud and clear.

"She was a pretty lady," he said. "If she teaches in college maybe I'll go there. I might be President one day."

The young students also read her essays about why she inspired them and how they admired her. That was probably the highlight of her day, as fielding questions about her favorite book as a child (The Lives of Great Composers) and whether she would run for President (no) was probably a lot easier than dealing with the NY Post's editorial board. The board questioned her about many issues, including Blackwater - here's the State Department transcript of the meeting.

Rice also told NY1's Dominic Carter that if Rudy Giuliani asked her to be on his ticket, she would say no: "I'm headed back to Stanford, I'm headed back to a wonderful life in California where eventually, I can end up back in the classroom in front of some of the best and brightest students from all over America."