“My first encounter with rape was when I was eight years old. We had a home invasion, and I could hear my mother being raped in the other room. Rather than call the police, my mother called my father, who was her ex at the time, and his first response to her was, ‘Do you think it’s something you did or wore, that caused this to happen to you?’”

That's Jessicka Addams, the frontwoman of Scarling and Jack Off Jill, speaking via Google Hangouts to a packed house in East Williamsburg's Holyrad Studio on Wednesday night. She goes on to tell another story, one she hasn’t told before. This story takes place a long time ago, when Addams was still an up-and-coming musician. In it, her friend walks in on Addams’ ex-boyfriend raping her. It’s incredibly rare for a sexual assault to have a witness who can offer testimony but that friend didn’t encourage Addams to go to the police—he told her to keep it to herself, so she didn’t compromise a record deal. Addams says her friend has since apologized and told her that, as the father of a 15-year-old daughter, he has nightmares about the incident every night. But she has kept it to herself, until now.

“You’ve let an eight-year-old unlock the door and tell her story for the first time,” says Addams. Then, after thanking the crowd for listening, Addams raises two middle fingers and yells, “Fuck rape culture.”

Addams chose to share her experience at a party/rally to oust Aaron Persky, the judge who handed down a six-month sentence to convicted rapist and former Stanford swimmer Brock Turner. Even if you weren’t one of the hundreds of guests in attendance, you may have heard about it on social media. The event garnered a lot of interest online in the nine days it was posted to Facebook, and GRLCVLT, the secret online feminist society behind it, has been tirelessly publicizing it beyond that platform.

“We’re kind of the digital feminist Freemasons,” explains GRLCVLT lead admin Remy Holwick. “And we like it that way! We like our secrecy, but we’ll make ourselves known when we need to.” 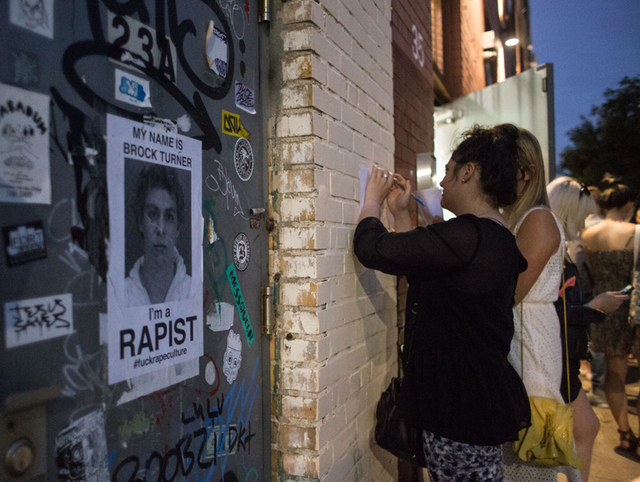 Grlcvlt began as a hidden Facebook group in Los Angeles, but now boasts chapters across the U.S. and internationally. Holwick runs the New York chapter, which at 3,000 members is the largest. She says she was spurred to organize GRLCVLT's biggest—and most public—gathering to date after feeling a collective frustration among her friends over the Brock Turner trial.

“There are so many moving parts that are so perfectly evil,” Holwick says. “You have a top level student who is white, male, straight. You have a woman who is not a member of the school, who is apparently less educated, who is victimized. You have her voice hidden by his family coming out and saying that he has potential. You have a white judge agreeing that he has potential, that he doesn’t deserve to be punished. What it comes down to is you see feminism failing.”

She wanted to do something, and signing a Change.org petition wasn’t enough. As Holwick sees it, “The power of the petition has been watered down to almost nothing. We have petitions going to the White House about Batman movies.” A quick search turns up around 30 petitions on Change.org around the Turner case.

Choosing a more proactive route, she posted to the GRLCVLT Facebook group, asking if 10 people would be interested in coming to her apartment to sign and mail official complaints to California’s Commission on Judicial Performance. One of the members happened to be a publicist, and offered to hype the event if Holwick could get a space. Holyrad Studio agreed to host, and pretty soon GRLCVLT had a full roster of bands and liquor sponsors—including Industry City Distillery. The Brooklyn company booted the band Good English from a concert earlier this month after discovering that its drummer, Leslie Rasmussen, had written a letter of support for Turner during his trial. 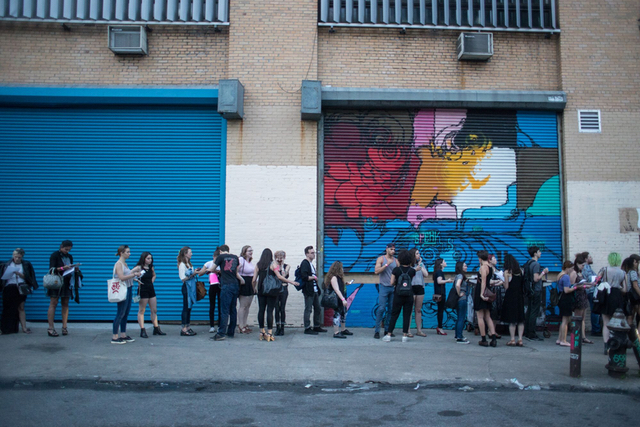 The doors opened at Holyrad Studio at 7 p.m. on Wednesday night. By 7:20, there was already a long line and 40-minute wait for entry. Volunteers sporting pink bandanas on their arms walked up and down the block, handing out printed complaint forms with nearly all the fields already filled out, as well as stamped and addressed envelopes. Along with the two-page complaint, every guest received an extra blank page for an optional personal statement. Cassidy Yost went with a single word: “Unacceptable.”

“My partner saw the event on Facebook and we decided to come,” Yost says. “I guess it just hit really close to home. It was too easy to imagine myself in the situation the victim found herself in.”

Inside the studio, bartenders served free beer and two cocktail specials: the vodka-infused “Fuck gRape(fruit) Culture” and whiskey-spiked “Still Not Asking For It.” Tables full of volunteers with extra forms stood on either side of the band in the back, and guests were encouraged to leave messages on the wall of whiteboards to the left. The notes included, “I love you. You are heard,” and “Sexual assault is everyone’s issue.” 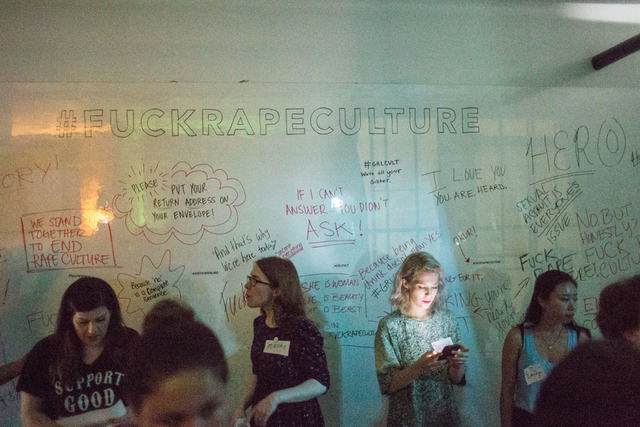 Over the course of the evening, the crowd heard performances from Edith Pop, It Was Romance, Beccs, Feathers+Eyes, and DJ Night Doll. The musicians frequently took breaks in between songs to address the Turner trial. Feathers+Eyes lead singer Alisha Roney shared her own reaction to the statement Turner’s victim read in court: “After I read the letter, I took a pregnancy test, because I cried three times when I read it. I thought, ‘I’m so hormonal, I must be pregnant.’ But I wasn’t pregnant, I was just really fucking mad.”

The volunteers would later project Addams’ speech on a white screen, as well as a Skype call with Stanford law professor Michele Dauber, who is spearheading a campaign to recall Persky. The evening ended with a LED-candelit vigil on the sidewalk for sexual assault victims.

As Holwick emphasizes, they’re not stopping with one party. Grlcvlt has similar events planned in Australia, Los Angeles, and San Francisco and is hoping to secure one in Washington, DC next. The group is even talking about establishing a 501c nonprofit to fight rape culture. But for many of the women and men at Holyrad Studio, this first step meant everything.

“It’s so powerful just walking up and seeing a line of people down the block. Having a visual representation of the folks who know what rape culture is,” says Danielle Trent. “I feel like the statement from the victim in this case impacted a lot of people because they had never heard those words. They never had those close conversations at night in a dorm room with their girlfriend after a party, that a lot of us have had. If you don’t have that experience, if you’re not forced to think about it, you don’t have to.” 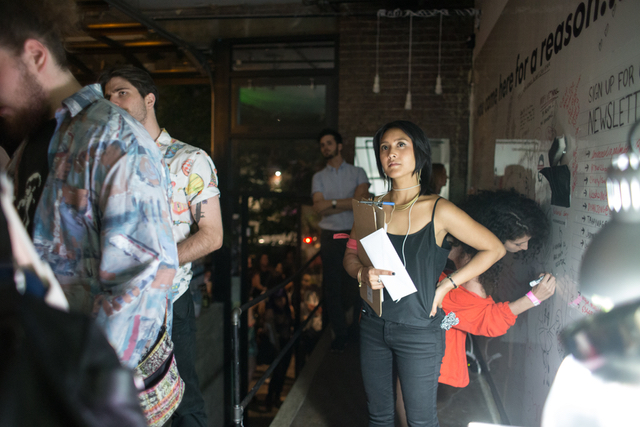 What You Can Do:

#Aaron Persky
#brock turner
#Grlcvlt
#rape culture
#original
Do you know the scoop? Comment below or Send us a Tip