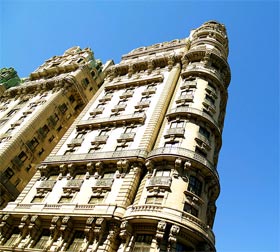 A married couple in the Upper West Side's Ansonia Building are suing their neighbor over her smoking. They claim her smoking is adversely affecting the hallway environment and the health of their four-year-old boy.

Johnathan and Jenny Selbin are both lawyers and say their son Charlie's health is at risk due to Galila Huff's chain-smoking in her own apartment. Huff, who owns Caffe La Fenice just a couple blocks down Broadway, has lived at the Ansonia for 15 years and has been a smoker for 40 years (since she was 17).

While she'd like to quit smoking, Huff says she just can't and has tried to address the situation. Huff gave the NY Times at tour , pointing "to her two Oreck XL air purifiers, double the number the manufacturer recommends for her 635-square-foot apartment." The Selbins, who doubt the existence of the purifiers because Huff has refused to show them receipts, actually think the smoke in the hall has gotten worse in the winter, suspecting Huff is smoking with closed windows.

Huff doesn't appreciate being characterized as a monster for something she does in the privacy of her own home. But smoking tenants are becoming an increasing sore point in the city's real estate market. Apparently concerns about neighbors smoking and the effects of secondhand smoke bring one real estate lawyer at least one new case a month.

A big problem in resolving such disputes arises from the legal murkiness of who's responsible for a remedy like sealing a smoker's apartment so it's essentially airtight, and also the subjectiveness of what constitutes secondhand smoke. Is it direct exposure harmful, or does the slightest scent of smoke constitute harm?

Have you ever been bothered by a neighbor's smoking? Or has your smoking prompted complaints from neighbors? And the Ansonia is no stranger to tenant lawsuits: It's being sued over a "biblical infestation" of roaches by other tenants.

#ansonia
#broadway
#co-ops
#condos
#lawsuits
#ny times
#real estate
#smoking
#the city
#Upper West
#Upper West Side
#west side
Do you know the scoop? Comment below or Send us a Tip