Seattle PD Kicks NYPD While Its Recruiting is Down 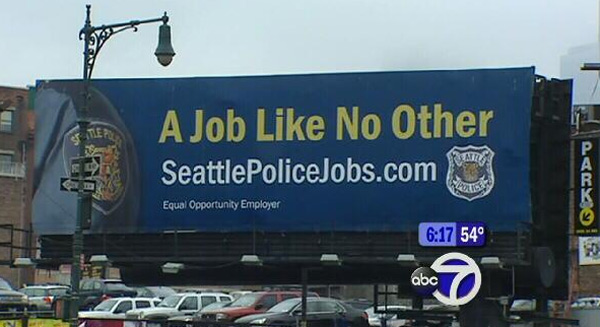 Seattle's police department is capitalizing on the NYPD's current budget and recruiting woes by giving potential recruits less of a reason to sign up to join the force in New York. Seattle is paying for a huge billboard along the West Side Highway advertising for recruits. The billboard and bus stop ads link to a site that details much higher rookie pay and faster wage increases. Per the Daily News,

Seattle pays its police recruits $47,334 a year and the annual salary rises to a maximum base pay of $67,045 in just six years.

The Seattle PD is also willing to kick in an extra $5,000 to cover any New Yorker's moving expenses. In addition, Seattle recruits can sit for that city's entrance exam here in NYC, which more than 20 members of the NYPD have already done.

Police Commissioner Ray Kelly has been critical of low starting salaries and faulted them for a drop in the number of people willing to sit for the department's entrance exam and high drop-out rate at the academy.