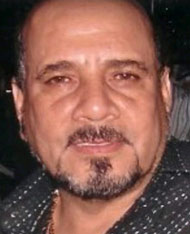 The police are reportedly looking for three to four suspects wanted in the fatal robbery of a Queens bodega owner on Monday. Bolivar Cruz (pictured) died on Tuesday after being shot in the head by robbers suspected of holding up over 15 other bodegas in Queens over the past few months. The robbers managed to steal $300 from Cruz's store.

The police have been questioning Michael Lane, 17, in connection with the incident, after the teen's friend heard him bragging about shooting a Cruz in the face. The Post says that Lane was scheduled to be sentenced for a different March robbery next week (he had been arrested four times since the March incident) but Lane says he made up the story.

Cruz will be buried in his native Dominican Republic next week, but there will be a wake and funeral in South Ozone Park on Monday. The 100 Blacks in Law Enforcement Who Care are offering a $1,000 reward for information leading to an arrest, and the police are offering $2,000 as well. And Queens City Councilman Miguel Martinez and Hispanics Across America announced a surveillance program for bodegas.