A day after a gas explosion caused three East Village buildings to collapse, firefighters were searching through debris left at the site for two men who remain missing.

WCBS 2 reported that they were "carefully digging through [the rubble] by hand." FDNY Commissioner Daniel Nigro said, "We don’t just pick it up with machines and put it in a truck and drive it away."

Police Commissioner William Bratton also called the search "very complex," and the NYPD had cadaver-sniffing dogs at the site yesterday. 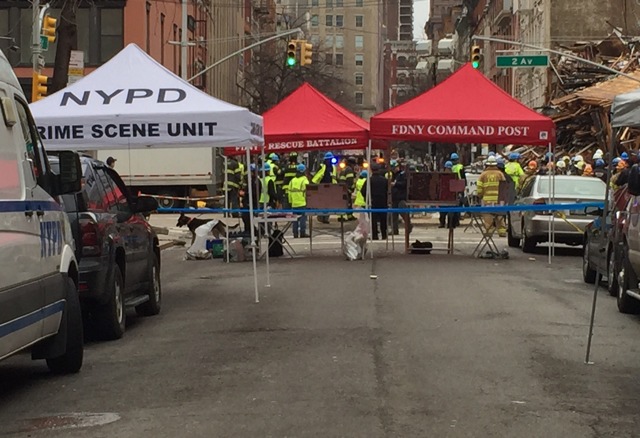 According to the city, there are two missing persons: Nicholas Figueroa, 23, who had been eating at Sushi Park, and Moises Ismael Locón Yac, 27, a Guatemalan immigrant who worked as a busboy at the restaurant. Figueroa had been on a date and his family has been frantically searching for him; his date managed to escape. His father told the Daily News, "Right now we don’t really know what to do, we’re just praying. I don’t know what to do. I’m gonna go crazy if my son is not here."

Locon lived in a rented room in Queens, where the Times reports, he had "poster of the Empire State Building and a framed cover from The New Yorker — a drawing of a cat looking out an apartment window at the cityscape." He had worked at the restaurant for a year and a half. His brothers have been going to hospitals and combing the neighborhood looking for him: "We have just been walking down the streets, one by one. We are just so exhausted and upset. I don’t know what happened to him, " they told the Daily News.

The owner of Sushi Park, Hyeonil Kim, told the Times that Locon was a good, "earnest” employee: "'Everything I lost is just lost, nothing I can do about it,' he said. 'But this friend —' Mr. Kim stopped speaking, overcome by sobs."