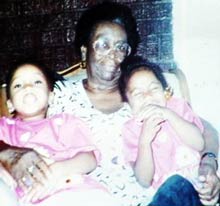 After the disturbing footage showing an 85-year-old woman who was followed into an apartment building, choked to unconsciousness in the elevator, and then robbed of her money AND cane, the NYPD is now, per Newsday, "focusing in large part on the area around Flatbush, near Prospect Park."

Police suspect the same person is behind that attack as well as 11 others (the other victims are 11 women and one man); they were robbed of money and things like a Bible and a Medicaid card, and one victim was punched in the face and spit up blood. Residents are worried, with one telling the Post, "I used to feel very safe. Now I feel like I need to have eyes in the back of my head."

The victim in this attack, Lillian France, remains in the hospital, because, per the Daily News, "her high blood pressure was aggravated her diabetes." She was headed to visit her niece Claire France who said her aunt was "so upset. The slightest noise startles her." But she did smile when Claire France gave her a new cane, a gift from a News reader who said, "I'd like to give the cane to the lady, but I'd also like to use it on him."

There is currently a $12,000 reward for information leading to the arrest and conviction of the suspect.