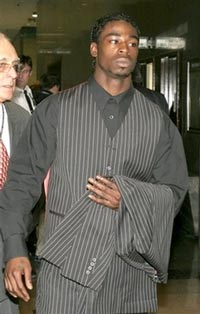 One of two friends in Sean Bell's car on November 25, 2006 testified in a Queens court room yesterday about the night where undercover police fatally shot Bell. Trent Benefield, who had been celebrating Bell's bachelor party at a Queens strip club, said he wounded, laying on the sidewalk, when he begged a man standing over him, "Please don’t shoot me. I don’t got nothing to do with nothing.’" The man turned out to be an undercover cop.

Benefield testified he didn't hear anyone mention a gun (defendants claim they heard some patrons talking about one, hence their use of force) but did admit, upon cross-examination, another club patron's posture suggested he was armed. The defense further grilled him about his drug use and drinking--he admitted smoking marijuana everyday for six years and being drunk on the night of the shooting. And from the Daily News:

[The defense] played a tape of a police interview done shortly after the shooting in which a groggy-sounding Benefield appeared to be giving testimony that was at odds with some of his statements on the stand.

They pointed out that Benefield initially told prosecutors that he saw a fight between Bell and Coicou and then told the grand jury a different story.

"You don't want to say anything, do you, that is going to stand in the way of that lawsuit," defense lawyer Anthony Ricco said.

Benefield. was shot in both ankles (he said the pain of being shot was a "15" on a scale of 1 to 10) and has a metal rod in his left leg, has not been able to return to work. He has received a $10,000 loan from Reverend Al Sharpton's National Action Network. Guzman is expected to testify today.

#nypd
#queens
#sean bell
#sean bell shooting
#Trent Benefield
#trial
Do you know the scoop? Comment below or Send us a Tip