Sean Bell's Friend Testifies: "I Thought I Was Dead" 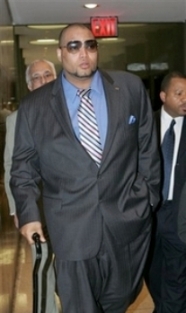 Joseph Guzman dramatically described the night he was hit 16 times, with 19 wounds all over his body, and his friend Sean Bell was killed
in a hail of police gunfire. In recalling the man holding a gun, who turned out to be an undercover detective, stood near Bell's car, "He shot me. I’m looking in his eyes, man. He shot me. Everything slowed down. But I’m looking at him shooting me. He’s continuing to shoot.”

Guzman said he never heard the police identify themselves and that he told Bell to escape from who they thought were armed thugs. Also, as they lay wounded, he told Bell he loved him and Bell whispered back, "I love you, too" and then stopped moving. Defense lawyers were skeptical, calling it a "movie script," (the Times reports a medical examiner said Bell's larynx was destroyed in the shooting). And Guzman's other exchanges with defense lawyers were testy. From WCBS 2:

Culleton: "And you're telling us you're trying to (crawl past Sean Bell to the door?)"

Guzman: "I'm still tryin' to get out of the car 'cause this dude (and he pointed at Det. Oliver) is still shootin'! Like he's crazy! Out of his mind! Like he's shootin' at a TANK or somethin'!"

Guzman: "Where you from, man?"

Guzman: "You're supposed to be a black man. Where you from?"

Guzman: "Well where I'm from, that's not a good bluff."

At one point, he said to Ricco, "You know what needs to happen? This needs to happen to your family.” When prosecutors asked Judge Arthur Cooperman, who will decide the three detectives' fate, to make Ricco stop badgering Guzman, Guzman said, "I ain't nervous of this dude right here."

Guzman survived, but has permanent injuries, a dropped foot, nerve damage, and a metal rod in one leg. He still has four bullets in him. He admitted on the stand that he accepted money from the Reverend Al Sharpton's National Action Network and referred to his past criminal history as "bad choices."

#joseph guzman
#queens
#sean bell
#sean bell shooting
#trial
Do you know the scoop? Comment below or Send us a Tip