Update: Queens DA Dick Brown just held a press conference with his prosecution team to discuss Judge Cooperman's not guilty verdict in the Sean Bell shooting trial. While many fault the prosecution's case against the three cops as the reason for its outcome, Brown defended the work of everyone involved in the case, stressing the amount of time and effort put into preparing the best prosecution possible. 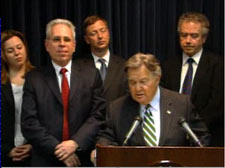 Most significantly, Brown defended the prosecution's decision to read the grand jury testimony of the accused into the court record, which allowed Judge Cooperman to hear the defendant's side of the story without subjecting them to cross examination, as "appropriate." Brown also said that the system worked in this case, as Cooperman's decision was based on all the facts available and the burdens of proof that prosecutors have to face. He stressed that Cooperman was one of the county's most experienced and fair jurists.

Lead prosecutor Charlie Testagrossa said that while not the longest, it was the most difficult case he's ever had to try. He said that he had a lot of respect for Judge Cooperman. While expressing no regrets over the way he tried the case, he also thought that it was not unwinable. DA Brown said that he's offered the full cooperation of his office to Ben Campbell, who is the US Attorney for the Eastern District if the feds plan on going ahead with a separate prosecution.

Update: Judge Cooperman found all three detectives not guilty of all charges. According to reports, there was a "stunned silence" and tears in the court. Cooperman said they were justified in the shooting--he found credibility issues with witnesses. One thing to note--the prosecution read the detectives' grand jury testimony in court, basically allowing them not to testify at all during this trial (see this Hamill story).

Per the Daily News, Cooperman said "did not view the victims or the NYPD as having been on trial here" and said, "The burden was on the people to prove guilt beyond a reasonable doubt. Each defendant was assumed to be innocent." Cooperman added, "Carelessness is not a crime." Here's the verdict sheet.

Police Commissioner Ray Kelly just had a press conference. He declined to comment about the verdict, because he'll have the final say in any departmental disciplinary action. He added that the US Attorney's office asked him not to start proceedings, because they are looking into the case.

The NAACP's Leroy Gatson said the court was bankrupt and justice was not served. He wants the feds to take over the case. 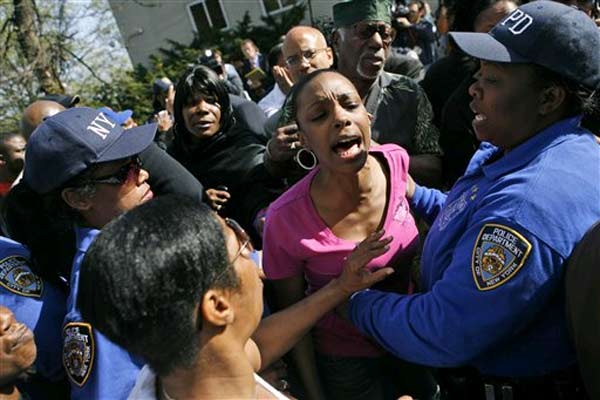 WNBC's Andrew Siff pointed out that Cooperman did not discuss the reckless endangerment charges at all--because the prosecution couldn't prove the "top half" (the manslaughter charges), Cooperman essentially wasn't going to discuss the other charges. And Cooperman felt testimony from Bell's friends, Joseph Guzman and Trent Benefield, undermined the prosecution, notably different stories of the evening's events. Siff added that Cooper said at the beginning of his remarks this morning that he would not factor in sympathy or emotion--"and he didn't."

Originally, a press conference from the Reverend Al Sharpton, Nicole Paultre-Bell, Joseph Guzman, Sean Bell family members and attorneys was scheduled for right after the verdict, but it seems they have left the courthouse. Sharpton has also scheduled a vent session at the National Action Network at 1 p.m.--during his radio show-- so it looks like his first comments will come then.

Relatively speaking, the procession outside of the courthouse was orderly (WNBC's Tim Minton compared it to Fifth Avenue, except with pissed off people). If anything, the scuffles looked like they were really between photographers and supporters of the Bell family.

Earlier: The verdict in the Sean Bell shooting trial, where three undercover police officers face charges including manslaughter, assault and reckless endangerment, is expected very soon. The defendants, Detectives Michael Oliver, Gescard Isnora and Marc Cooper, opted for a bench trial instead of a jury trial, will hear the decision by Judge Arthur Cooperman, as will friends, family and supporters of Bell who are gathered at the Queens courthouse.

Cooperman is the subject of a NY Post article, which finds him to be "no-nonsense" and says his decision "will be one of the most important bench-trial verdicts in the city's history today." But the Daily News' Denis Hamill thinks that the trial will be remembered for the strange prosecution. 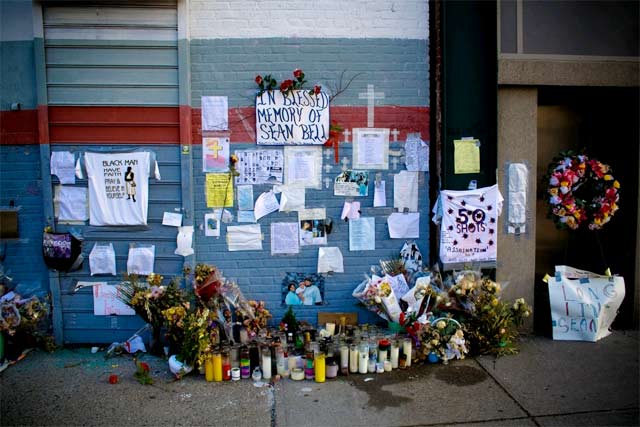 The NY Times has a graphic explaining the various charges the three officers face. Oliver, who fired 31 of the 50 shots aimed at Bell and his two friends on November 25, 2006, could spend up to 25 years in jail if convicted of all charges; Isnora fired 11 times and Cooper 4 times (the cops who fired the other shots were not indicted).

And while Mayor Bloomberg has said he doesn't expect violence after a verdict, the police are on alert.