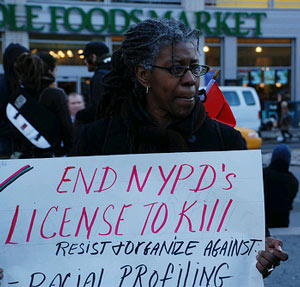 The three police officers facing trial for the November 2006 shooting of an unarmed man are requesting to their trial moved from Queens. Lawyers for Michael Oliver, Gescard Isnora, and Marc Cooper claim they won't be able to get a fair trial in Queens, blaming media attention for "incurably poison[ing]" any potential jury pool.

On November 25, 2006, Sean Bell was having a bachelor party with friends on the eve of his wedding. When he and two friends left Club Kalua, a strip club in Queens - where police happened to be conducting an undercover operation - they were followed by police. Chaos ensued (police say they identified themselves, Bell's friends say they didn't know they were police) and fifty shots were fired, killing Bell and wounding his friends. The incident raised questions about police shooting guidelines, undercover operations, and police-community relations.

Last March, Oliver and Isnora were indicted on manslaughter charges; Cooper faces reckless endangerment charges. Defense lawyers pointed to a poll they commissioned, which "shows that 83% of black potential jurors think the shooting was unjustified," leading one of the lawyers to say, "Many have already decided that there is nothing more to consider and that the police are necessarily guilty of some crime." The head of the Detectives Endowment Association Michael Palladino said,"The negative publicity and the antics of Al Sharpton and others have created a situation where the right to a fair trial is in jeopardy."

The motion was filed with the Appellate Court, which had previously moved the Amadous Diallo shooting trial from the Bronx. Queens District Attorney Richard Brown said he wants the trial in his borough, "Nothing contained in the defendants' motion papers changes my belief that a fair and impartial jury can be found among the 2.3 million residents of Queens County." The Reverend Al Sharpton also said the attempt to move the trial was "outrageous."

Photograph from a March 2007 rally by Justin T. Shockley on Flickr