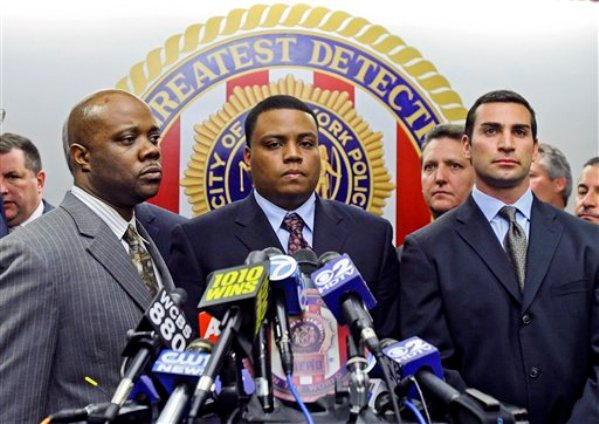 Detectives Michael Oliver, Gescard Isnora and Marc Cooper, who were acquitted of all charges in the Sean Bell shooting trial, spoke at a press conference this afternoon. Detectives Oliver and Isnora thanked Judge Cooperman for his "fair" decision (Isnora also, per City Room, "thanked God, his family, his lawyers"). Detective Cooper, who was only charged with reckless endangerment, said, "I'd like to say sorry to the Bell family for the tragedy." None of the detectives testified during the trial, as their grand jury testimony had been read aloud by the prosecution.

However, the verdict was denounced by the Reverend Al Sharpton, who said, "This verdict is one round down, but the fight is far from over. What we saw in court today was not a miscarriage of justice. Justice didn't miscarry. This was an abortion of justice."

Mayor Bloomberg said, "There are no winners in a trial like this. An innocent man lost his life, a bride lost her groom, two daughters lost their father, and a mother and a father lost their son. No verdict could ever end the grief that those who knew and loved Sean Bell suffer. Judge Cooperman’s responsibility, however, was to decide the case based on the evidence presented in the courtroom. America is a nation of laws, and though not everyone will agree with the verdicts and opinions issued by the courts, we accept their authority." You can read the full text of Cooperman's remarks here.

Here are some other reactions: