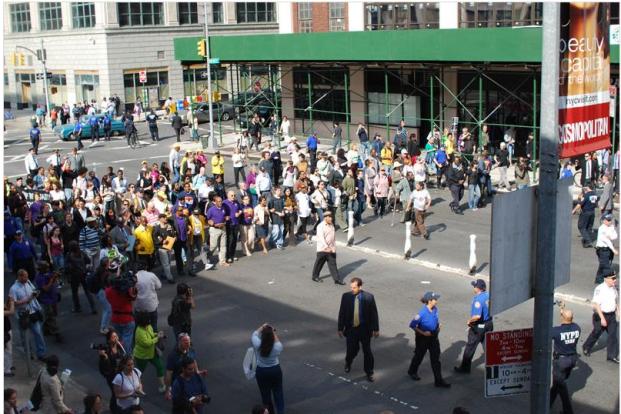 Photograph of protesters on Varick Street by stconrad on Flickr

Hundreds of people gathered at six different locations in the city to protest the acquittal of three police detectives in the Sean Bell shooting. They blocked traffic at the Queensboro Bridge, Triborough Bridge, Manhttan Bridge, Holland Tunnel, Queens Midtown Tunnel and Brooklyn Bridge, and arrests were made at the Queens Midtown Tunnel and Brooklyn Bridge. 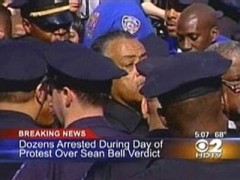 The arrests seem to be because the protesters have been blocking traffic, either forming a human chain or sitting down in front of the bridges. There are delays on the Brooklyn and Manhattan Bridges, while traffic was "momentarily halted" on the Triborough.

At the Brooklyn Bridge, the AP reports the Reverend Al Sharpton, Bell's fiancee Nicole Paultre Bell, Trent Benefield and Joseph Guzman (Benefield and Guzman were with Bell during the shooting) were arrested--they "lined up and peacefully put their hands behind their backs as police put plastic handcuffs on them."