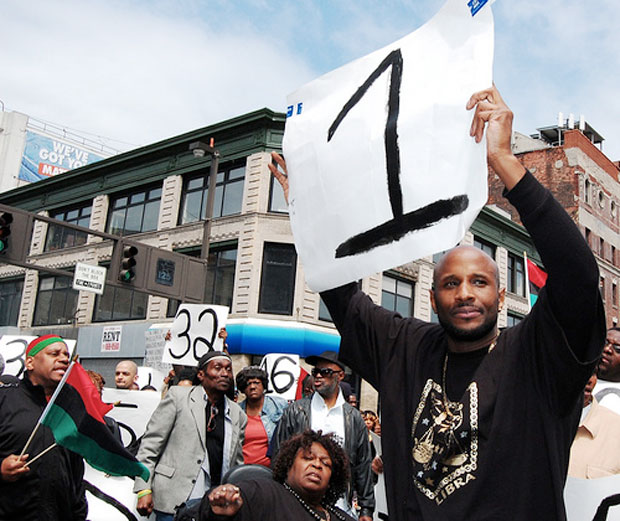 Photograph of protesters in Harlem on April 26, 2008 by urbanblitz on Flickr

Today at 3 p.m., six pray-ins are planned around Manhattan and Brooklyn to protest the Sean Bell shooting verdict. The Reverend Al Sharpton is leading the events and has said he and other participants are willing to be arrested to make a point about the acquittals of the three police detectives who helped fire a total of 50 shots at the unarmed Bell on November 25, 2006. Sharpton said, "If you are not going to lock up the guilty in this town, then I guess you'll have to lock up the innocent."

However, the NYPD and Mayor Bloomberg do not expect the protests to be violent. The NYPD said, "The vigils and demonstrations related to the Bell case to date have not been violent. We have no reason expect otherwise now," while Bloomberg said, "I think it's another example of people being able to protest in New York City, but rest assured that we will enforce the law and we will do everything we can to make sure we don't violate anybody's rights." (Lesson learned after the 2004 Republican Convention?) 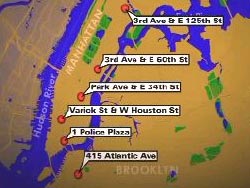 many of the protest sites "are near transportation pressure points" (the Triborough and Queensboro Bridges, the Queens Midtown and Holland Tunnels). The MTA's Jeremy Soffin said, "We will be in very close contact with the New York Police Department and their command center to reroute buses and redirect people as necessary."

And Sharpton wants the feds to prosecute the police officers, "The city hasn't shown ... the ability to reform itself. We need federal intervention."

#nypd
#protests
#reverend al sharpton
#sean bell
#sean bell shooting
#Sean Bell shooting trial
Do you know the scoop? Comment below or Send us a Tip
A new Gothamist is coming! We’ve moved comments over to our beta site. Click here to join the conversation and get a preview of our new website.