Sean Avery Keeps It Not So Classy, Gets Suspended 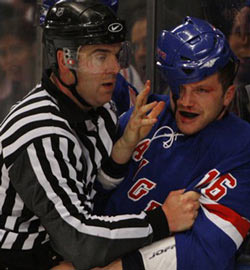 Sure, Sean Avery was traded to the Dallas Stars, but he left his mark as Ranger, what with the Sean Avery/Nitwit Rule for this move in April. But for all his antics, he was never suspended before--until now.

Avery has been suspended indefinitely for taking shots at fellow players and his ex-girlfriends. The morning of his game against the Calgary Flames, Avery spoke to reporters (after making sure a camera was present): "I'm just going to say one thing. I'm really happy to be back in Calgary; I love Canada. I just want to comment on how it's become like a common thing in the NHL for guys to fall in love with my sloppy seconds. I don't know what that's about, but enjoy the game tonight."

A little background: Avery used to date both actress Elisha Cuthbert (24, Old School, an episode of MTV Cribs featuring Avery) and model Rachel Hunter (ex of Rod Stewart and Stacy's Mom). Now Cuthbert is dating Calgary defenseman Dion Phaneuf (ESPN adds she was "romantically linked to Mike Komisarek of the Montreal Canadiens) and Hunter is dating Jarret Stoll of the L.A. Kings. So, while fighting isn't a big deal, talking smack is, so the NHL suspended him for "inappropriate public comments, not pertaining to the game."

The Stars agreed, with their owner Tom Hicks saying, "Had the league not have suspended him, the Dallas Stars would have. This organization will not tolerate such behavior, especially from a member of our hockey team. We hold our team to a higher standard and will continue to do so." Hey, Hicks, at least he didn't shoot himself in the thigh accidentally...right?

#Dallas Stars
#hockey
#rangers
#sean avery
#sloppy seconds
#smack talk
Do you know the scoop? Comment below or Send us a Tip