Privately owned public space: still an oxymoron. Cooked up by the city in 1961 as a way to entice developers to create and maintain public spaces in exchange for zoning breaks that allowed them to build bigger, the rules have changed over the years, but the plazas and atriums have come to be defined by creeping commercialization, stern security guards enforcing a galaxy of unknowable rules, lackadaisical enforcement by the city, and in some cases, the complete removal of the spaces (but not the skyscrapers' additional floors) by building owners.

The last comprehensive survey of the city's more than 500 POPS, as they're called, was done by the Department of City Planning and Harvard urban design professor Jerold Kayden in the late 1990s. Researchers found that 41 percent of the spaces were of "marginal utility," and half of the buildings that included POPS were somehow breaking the rules. The only thing approaching a current public accounting of where POPS are and what's happening with them is a website managed by Kayden.

The spaces have been in the news lately thanks to a certain demagogic Dorito/minor New York landowner and former reality TV star who is the presumptive Republican nominee for president, specifically, because he took out a bench in the public lobby of Trump Tower and replaced it with kiosks selling Make America Great Again swag. Trump got about 10 extra floors on his East 56th Street building for keeping the lobby public along with some secret garden terraces on the fourth and fifth floors. Crain's New York Business recently found that access to the terraces is barred by security guards restricting access to the elevators. If one comes in a side entrance on Madison Avenue and takes the escalators up, she is liable to find half the trees planted in the space dead, and the doors locked during hours that the terraces are supposed to be open, according to Crain's, all violations of the public space agreement.

For the lobby infractions, Trump's company was fined $4,000, then another $4,000, then a week ago, when nobody showed to a Department of Buildings hearing, another $10,000. The kiosks have been moved downstairs, but the bench is still not back, despite assurances from a Trump Organization lawyer. Trump is also being investigated by the DOB for repeatedly closing the lobby to use for campaign events, according to Crain's, apparently in violation of a city agreement limiting closures to four times a year with prior authorization.

Enter City Councilmen David Greenfield, Ben Kallos, and Donovan Richards. The trio has introduced a bill that would require the Department of City Planning to report twice annually about the status of each POPS in the city (without inspecting them), and create and maintain a map of the spaces. The bill would also require the Department of Buildings to report annually on complaints and violations regarding each space and whether the department authorized any closures. 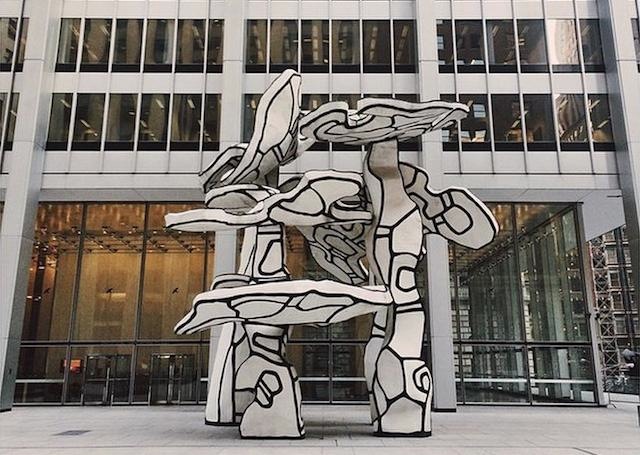 "I hope Trump replaces the bench," Richards said with a smirk during the hearing. "We are pleading with you to return public space back to the way it should be, Mr. Trump. We will not vote for you unless you return the bench—we will probably not vote for you either way. This is a plea to the Republican Party: before you consider Donald Trump, he must return the bench."

Richards, Greenfield, Chin, and other officials made it clear that Trump's scofflaw approach is far from unique among landlords reaping the benefits of POPS designations without the public getting its part of the bargain.

"Part of this discussion is the dramatic flouting of the rules at Trump Tower," said Greenfield, who chaired the meeting. "But to be fair, Trump Tower is one of many."

The bottom line is, folks, we have a real problem here. We have permitted the construction of millions of square feet across the city, but we’re not sure if the public is getting their end of the bargain. POPS have become like some orphans slipping through the cracks between agencies. These spaces taken together are acres and acres of public space and we need to protect them like the resource that they are. Perhaps this is the one and only blessing in what the Trump campaign has focused our attention on. It’s time to make POPS great again.

Stories of mismanaged and authoritarian POPS abounded. There is the Le Parker Meridien hotel lobby, which is supposed to be part of a public passageway between 56th and 57th, but where workers at the Knave cafe and bar enforce a strict no-outside-food policy. Despite reporting on the issue in the New York Times, a Department of Buildings chief of Special Operations Joseph Ventour said he was not aware of a problem at that address, and no violations are on file. 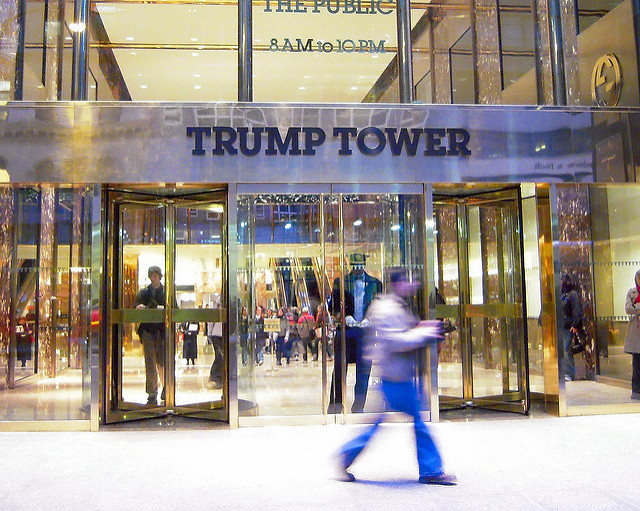 Also in Greenfield's list of most complained-about spaces was 40 Broad Street in the Financial District, where sometime in the 2000s the building owner moved the planters from a plaza and turned it into staff parking. The building is now condos, and the DOB fined owner HFZ Capital Group $4,000 in 2012, records show. The site is now being used for some sort of construction. When NY1 sent a crew to 40 Broad, a building worker tried to block their camera.

At 325 Fifth Avenue, a plaza is locked to all comers. DOB inspectors have visited three times, starting last year, and fined the building owner $4,000, so far to no avail.

A security guard also barred NY1 from filming at the atrium at 590 Madison, the former IBM building now owned by Edward J. Minskoff Equities. A complaint on the POPS site regarding the Madison space reads:

I went to this space today to play some chess with my two young children (ages 6 and 10), and was shortly harassed by the security guards, who claimed that no chess was allowed there. The guards told me that the posted sign says “No game playing”, but I found out upon inspecting the sign that this isn’t true (although it does say “No gambling, no card playing”). What are the actual rules? Is it really true that there could be a rule against chess playing?

We were not disturbing anyone and were behaving in a calm, civilized manner. Why should they forbid me to play chess with my kids? This makes no sense to me, and I find it absurd that they insisted I stop playing and pack it up immediately.

During the hearing, Councilman Daniel Garodnick recounted being bullied by a security guard in the POPS at Normandie Court, at East 95th Street and Third Avenue. He was campaigning for reelection in 2009 in the plaza outside the luxury residential tower when a guard approached and demanded that he leave, he said.

"You can’t do that here," he remembered the guard saying. 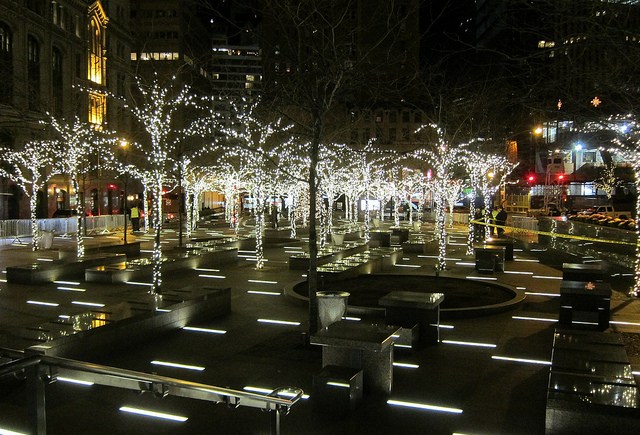 Garodnick said that he stood his ground even as the guard called the police, and that when an officer arrived and heard the situation explained, he told the guard he was in the wrong and Garodnick could stay.

"As an attorney and a sitting member of the City Council, I was exercising a high level of confidence in this situation, but not everybody does," he said.

It's clear that landlords can't turn their public spaces into gift shops, cafes, or parking lots, what rules they are allowed to make is less clear, which the Councilmembers and Kayden, who flew in for the hearing, said is a problem. In a prepared statement, Councilman Jumaane Williams recalled the mystery of the rules at the Brookfield Properties owned Zuccotti Park during Occupy Wall Street, and how he saw them change in real time. Kayden said the city should make a clear framework for what rules can be set.

"[We need to] make sure that everybody recognizes what rules owners may impose on users of public space," he said. "Post-Occupy Wall Street, the Real Estate Board of New York circulated Brookfield's rules, and now you see these plaques everywhere."

Sussman, the minder of 590 Madison, said he is fine with whatever regulations the city comes up with.

"If the city wants to codify and make consistent the rules from POPS to POPS to POPS and come by and inspect twice a year, we welcome it, and we will comply the same way we think we're complying now," he said.

The Department of City Planning and Department of Buildings representatives in attendance said they were open to reporting on where POPS are and whether owners had filed paperwork or been issued violations. Doing regular citywide inspections like the one done in 2000, on the other hand, is out of reach, they said.

Though no formal proposal is on the table, Greenfield indicated that he thinks regular proactive inspections are the way to go, and floated the idea of allocating money to hire a full-time Department of Buildings inspector dedicated to POPS.

"We could certainly consider that," said Patrick Wehle, assistant commissioner of external affairs for the DOB. 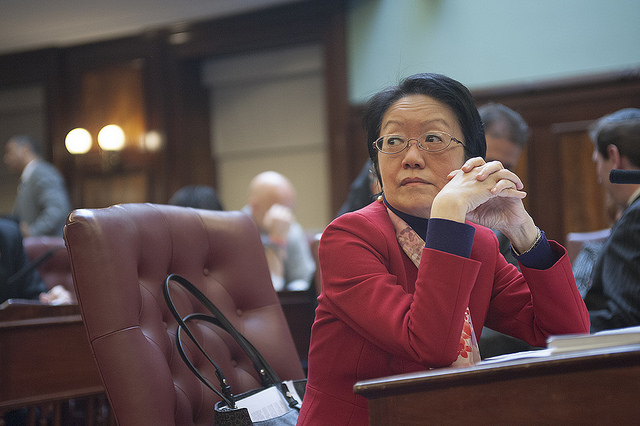 There was no vote on the reporting bill. The hearing, and the positioning of a handful of Councilmembers as defenders of public space, came nine days after the City Council gave away two football fields of it to developers.

On June 21st, the City Council passed a zoning amendment that will turn the gallery space in front of 20 buildings along Water Street in the Financial District into storefronts. The move is likely to net the owners of the formerly public space hundreds of millions of dollars annually in commercial rent. In exchange, the landlords have agreed to spruce up nearby plazas built in the 1960s, bringing them into compliance with the more elaborate, verdant standards put in place in 2007 and 2009.

Neighborhood activists objected to the plan, saying it was presented wholly formed to the local community board in the spring after back-room deals between the Downtown Alliance, the quasi-public Economic Development Corporation, and the City Planning Department. The Council gave signs of opposing it, but after tweaks—to limit the amount of banks and pharmacies that go in the former gallery space, and give the Council input on commercial tenants—local Councilwoman Margaret Chin approved and her colleagues fell in line behind her.

Chin is a regular at press conferences for tenants facing harassment and eviction in her district, and sometimes proposes tenant protection legislation. These stances are despite Chin's having been reelected in 2013 with the support of a dark-money political action committee formed by the influential lobbying group the Real Estate Board of New York, which spent $121,000 to get her elected, more than 1 1/2 times as much as her campaign raised.

“This wasn’t an easy decision to make,” Chin said in a statement following the Water Street vote. “There have been many passionate voices that wanted this proposal to be rejected outright, or conversely, wanted the text amendment passed as is. The modified proposal seeks to strike a balance of community input and public oversight with regard to the infill of arcades while providing flexibility to achieve the desired goals of improved public space, neighborhood retail, and pedestrian experience.”

Community Board 1 member and architect Alice Blank opposed the Water Street deal. Testifying at Wednesday's hearing, she said she was "disappointed" by the Council's recent decision. "I trust this will not be a precedent for the future conversion of public space for use as commercial space," she said.

Greenfield cut her off. "It's not the appropriate forum for that," he said.