Swimming in the Gowanus Canal is still not safe, but if you want to take a paddle along the Lavender Lake, you shouldn't be worried about your health—at least according to the New York State Department of Health.

Last week, the agency released a 68-page analysis of the health hazards posed to humans working or recreating in the vicinity of the canal. The report, which is based on a decade of research, found that limited direct contact with the canal's waters, through boating or fishing, did not pose heightened risk of developing cancer or other diseases.

Recreational boating on the canal, a concept that may still elicit horror from many Brooklynites, has become popular in recent years with a certain set of urban adventurers, and in 2014 playwright and director Jeff Stark staged a fascinating site-specific theatrical production on the Gowanus. According to the report, it's fine to paddle around in your kayak, but you'll want to try to avoid splashing a lot of water on your skin. Make sure to thoroughly wash your hands or any other skin exposed to the canal's toxic waters after your boat trip.

The report notes that while boating or fishing from a boat on the canal is likely safe, boaters should keep their eyes open: "There may be some physical hazards such as large commercial boat traffic."

While the DOH recommends generally avoiding eating the fish in the canal, the analysis found that women over 50 and men over 15 should be ok consuming bluefish or atlantic needlefish once a month, and blue crabs for up to four meals a month. Just make sure to dispose of the cooking water from the crabs because it catches all the toxins. (I can't endorse you eating anything from the canal—the Park Slope Whole Foods is not far away and they really do have some pretty good deals on fresh fish if you keep your eyes open.) 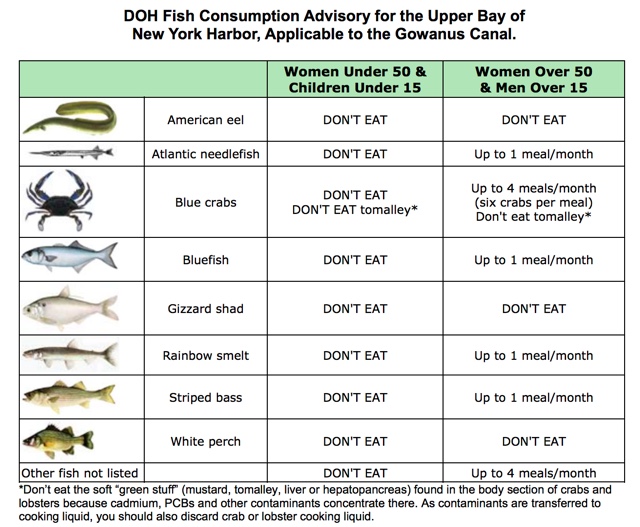 Christopher Swain, an environmental educator who has been working on building awareness about the state of the canal for more than a decade and who has earned notoriety for swimming in the canal, said he hopes the canal will one day be safe for swimming, but that for now, New Yorkers should follow the recommendations of the report.

"I wouldn’t get in there and swim if I were you," he said. "There are parts that are toxic and in some cases flammable.” For his swim, Swain wore a dry suit, swim cap, gogles, and earplugs, and covered his face with water repelling cream. He also gargled hydrogen peroxide before and after to neutralize any pathogens splashed in his mouth during the swim.

The Gowanus Canal was designated a Superfund site by the Environmental Protection Agency back in 2010. The agency has plans to invest $500 million in the cleanup of the heavily contaminated 1.8 mile waterway, but the beginning of that process may still be years away.

According to the report, if you happen to live or work near the canal, you should be alright. Concentrations of pollutants present in the canal, including benzene, chloroform, and naphthalene, were not found to be elevated compared to typical air quality in the city.

The report does suggest that pleasure boaters avoid the canal after major rainfalls or periods of “effluent discharge,” i.e. raw sewage. Also, if the water looks particularly cloudy, oil-slicked, or otherwise disgusting, best to take the day off.

The canal has been known to flood—it inundated the neighborhood during Hurricane Sandy—and locals should steer clear when it does.