Schwarzman Gets Name on NYPL 5 Times 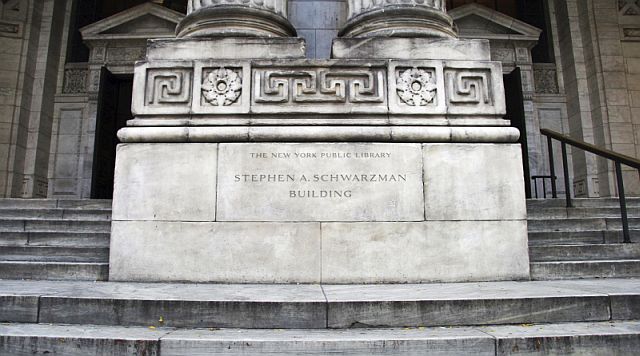 Rendering of the forthcoming Schwarzman inscription designed by Pentagram

Earlier this week, the Landmarks Preservation Commission unanimously agreed to allow the main branch of the New York Public Library at Fifth Avenue and 42nd Street to inscribe the name of a prominent donor, financier Stephen A. Schwarzman, multiple times on the library facade. The fabulously wealthy son of a grocer and co-founder of the Blackstone Group will have his name inscribed five times on the library’s façade as a shout-out for his $100 million unconditional gift to the NYPL. 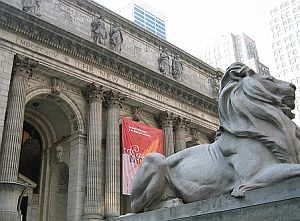 But some critics argue that a Schwarzman naming quintet is excessive. Nadezhda Williams of the Historic Districts Council testified at the commission hearing that, “the amount of the inscriptions and their proposed language, design and location take away from the restrained classical, austere grandeur” of the Beaux-Arts landmark, built in 1911 with money from philanthropists John Jacob Astor, James Lenox, and Samuel Tilden. Those names are currently the only ones out front, to be joined by Schwarzman sometime next year as the library moves forward with extensive renovations.

Paul LeClerc, the library’s president, insists that Schwarzman’s name needs to be etched five times to maintain symmetry: It'll be added onto two center columns leading to the main entrance, on a gold plaque on the floor outside the front door, and on the pedestals beneath the lamps at the 42nd Street entrance. And while the founders’ names are a foot high, Schwarzman’s name will be a modest 1 to 2 ½ inches in height.

So at $20 million per inscription, could a less well-heeled donor slap his name up there one time – or maybe just his initials for a cool million? No dice, philanthropists; LeClerc promised the commission that there would never again be another name carved into the building’s facade.