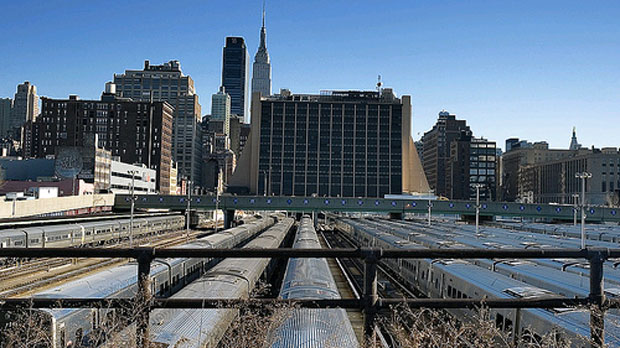 With the deal to develop the West Side rail yards on the ropes, Senator Chuck Schumer said that Mayor Bloomberg's plan for the West Side is the "goofiest thing I've ever seen." According to the Sun, Schumer was specifically referring to "the Bloomberg administration’s decision to include a mid-block boulevard," claiming that it was sapping funds from the much-needed 7 line extension.

Mayor Bloomberg zinged back, "New York City government — elected by the people — is what is going to determine what goes on in this city, not any study panel, not any elected officials outside of local city government, and all of this is not helpful in terms of satisfying developers.” Bloomberg also snapped at Schumer's suggestions for the Port Authority to take over control of Moynihan station planning (the mayor pointed out the PA is behind with World Trade Center development) and that the city should plan various development scenarios on "parallel tracks" (Bloomberg said if Schumer can get the money, "we'll be able to do all that at the same time").

As for talks about saving a Hudson Yards deal between the MTA and developer Tishman Speyer, the MTA issued this statement:

Dellaverson had said over the weekend that he wasn't going into the meeting "with an expectation" because Tishman's demands were unacceptable, but if the MTA has to start from scratch, it could be embarrassing.

#hudson yards
#mayor bloomberg
#Moynihan Station
#MTA
#senator schumer
#tishman speyer
#west side
#west side rail yards
Do you know the scoop? Comment below or Send us a Tip