Schumer Explains His Support of Mukasey for AG 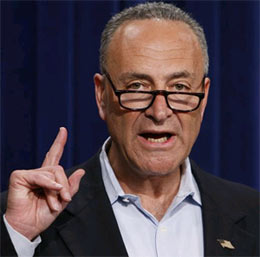 Democrats Senator Charles Schumer and Senator Dianne Feinstein joined nine Republicans on the Senate Judiciary Committee and approved the nomination of Attorney General nominee Michael Mukasey to go to the full Senate. The vote was 11-8, the eight opposing votes from the remaining Democrats on the committee. His confirmation is expected next week.

Mukasey - and his supporters - has faced criticism after not declaring waterboarding illegal. Schumer has an op-ed in today's NY Times outlining his support for Mukasey.

Most important, Judge Mukasey has demonstrated his fidelity to the rule of law, saying that if he believed the president were violating the law he would resign.

Should we reject Judge Mukasey, President Bush has said he would install an acting, caretaker attorney general who could serve for the rest of his term without the advice and consent of the Senate. To accept such an unaccountable attorney general, I believe, would be to surrender the department to the extreme ideology of Vice President Dick Cheney and his chief of staff, David Addington. All the work we did to pressure Attorney General Alberto Gonzales to resign would be undone in a moment.