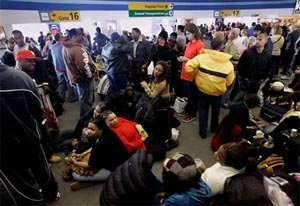 The Senate Joint Economic Committee's researchers released a report yesterday (working weekend!) which has some wild stats, like how delayed flights consume an additional 740 million gallons of jet fuel and how 20% of domestic flight time is wasted in delay.

Also: "78% of flight delays in 2007 occurred before take-off, with 58 percent at the gate, and 20 percent during the taxi to the runway" and "94 percent of all flight delays were caused by other flights arriving late, national system delays, or air carrier delays" (the other 6% is security and extreme weather).

As for NYC's JFK, LaGuardia and Newark Airports, the three airports combine for 27 millions of passenger delays and adds up to $5 billion in lost money, including $1.45 billion in passengers' lost time, $1.6 billion for the local economy, and $2.3 billion in airline profits (well, the airlines will start charging $15 for checked bags, so maybe that's okay).

Schumer has previously asked the head of the FAA to resign over the poor state of air travel in the NYC area. He also wants an airport czar to fix things.