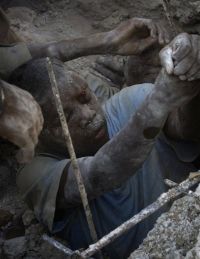 Dozens of children have died in Haiti after a school collapsed near Port-au-Prince, the nation's capital. The death toll is now reported to be over 80 and rapidly approaching 100 . The collapse took place around 10 a.m. yesterday morning in a school with more than 700 students of ages ranging from 10 to 20. A journalist with the Haiti Press Network reported that more than 200 students were still trapped in the rubble as of midnight last night and another 200 have been treated by medical staff in the area. However two of the three nearby hospitals have been shut down due to worker strikes.

The rescue effort is being overseen by Haitian President Rene Preval and Prime Minister Michele Pierre-Louis. Preval told the press he could hear children stuck inside calling for help as he visited the disaster site. One Red Cross official who was talking to rescuers on the scene said, "On the phone you can hear so many children, you know, crying, crying, and saying, "This one is dead. that one is dead.'"

Questions are already being raised about whether the school was overpopulated past what its capacity should have been. The school has been described as "poorly built" and is located in a very impoverished part of town.