An elderly Bronx school bus driver who was put into a coma earlier this month by an angry driver—who attacked him because the school bus hit his double-parked car—has died. Bus driver and grandfather Juan Del Valle, 65, never regained consciousness at St. Barnabas Hospital after he was beaten into a coma by 30-year-old Joey Scott. “The family had been struggling all week with whether or not to take him off life support,” Carolyn Daly, a spokeswoman for Atlantic Express bus company where Delvalle worked for eight years, told the Post. 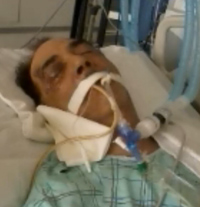 “The swelling and bleeding in the brain were extensive,” she said. “He was hooked up to a ventilator and that was the only reason he could breath. He never regained consciousness. It was a very, very severe injury.” In his will, Del Valle has specified that he didn't want to be hooked up to a machine for the rest of his life. He was taken off life support yesterday, and died at 6:19 p.m.

The incident took place on June 11, when Del Valle clipped an illegally double-parked vehicle at the intersection of Anthony and Echo Avenues, knocking off the side view mirror. Del Valle, who was driving two middle schoolers home, got out of the bus to see what happened—and an enraged Scott punched him twice in the face. Del Valle fell and struck his head on the pavement. You can see surveillance video of the assault around the 1:20 mark in the video below:

Scott, who fled the scene, was eventually arrested and charged with felony assault. The family and Daly are now hoping that charge is increased to homicide. “Now he’s been murdered,” said Daly. “This guy was double-parked, and the only thing that happened was that his rear-view mirror was scraped. You don’t lose it over a mirror and you certainly don’t punch a 65-year-old man wearing a uniform who’s got children in his care.”