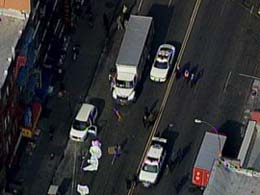 A 60-year-old Con Ed worker and a 74-year-old great-grandmother were killed in hit-and-run incidents in Manhattan and Brooklyn, while a 69-year-old wheelchair-bound man was critically injured in Queens yesterday.

#18 wheeler
#bay ridge
#bowery
#brooklyn
#hit and run
#manhattan
#pedestrian fatality
#queens
Do you know the scoop? Comment below or Send us a Tip
A new Gothamist is coming! We’ve moved comments over to our beta site. Click here to join the conversation and get a preview of our new website.