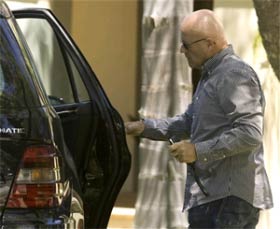 A man posing as Heath Ledger's father managed to get free hotel rooms and talk to Tom Cruise and John Travolta after the actor's death last week. The Post reports the "twisted impostor" got Tom Cruise to console him on the phone and almost "got John Travolta to buy him a plane ticket to the United States." Why does this sound like a radio shock jock prank?

With Ledger's father Kim (pictured) rumored to arrive in New York to pick up his son's body, perhaps the Frank E. Campbell Funeral Home can't be faulted for booking rooms at the Carlyle Hotel for the impostor. A source tells the Post the "hoaxer even got them to send free stuff to their rooms 'when nobody was there.'" The impostor also called the ME's office to speak with the doctor who performed the autopsy, but it's unclear if the doctor told him anything.

As for fooling celebrities, the scammer spoke to Tom Cruise a few times, until Ledger's family alerted celebrities of the impostor. John Travolta was very close to booking airplane tickets for the faker from Australia to the United States (Travolta's publicist says that's not true, but admits her client did speak to the man). The impostor was also trying to get the phone numbers of Mel Gibson and Christian Bale.

The police want to arrest the con man, but haven't been able to find him yet. The actual Kim Ledger was seen arriving at JFK last night. His son, found dead in a Soho apartment one week ago, is expected to be buried in Australia.