The Department of Transportation is planning to remove the dedicated bike lane on a portion of Jay Street in DUMBO to make room for two-way traffic, a move that some are concerned will endanger cyclists and is counterintuitive to the city's Vision Zero goal.

Currently, Jay Street runs two ways until it hits York Street, where it becomes a one-way, northbound street for just a block, before switching to be southbound after Prospect Street. The DOT's proposal would eliminate the existing five-foot bike lane on the east side of the street between York and Prospect to allow traffic to flow both ways on that one-block stretch, allowing drivers going south on Jay Street to get right onto the Brooklyn-Queens Expressway, rather than having to make a right turn onto York. 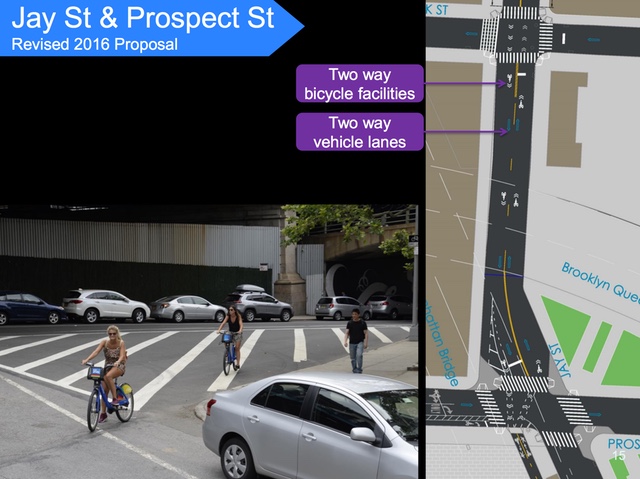 The DOT presented the proposal to Brooklyn's Community Board 2 on Tuesday night, where project manager Dan Wagner explained that this is an attempt "to cut out excess vehicular miles traveled" by preventing cars from making that extra turn on York Street.

In 2012, Jay Street's 17-block stretch was voted Brooklyn's scariest bike lane by Brooklyn Paper readers. The street saw 68 crashes between 2011 and 2014, and has prompted cyclists beleaguered by often-blocked bike lanes to demand improvements.

.@NYC_DOT maybe focus on the part of #fixJayStreet that is unsafe for peds and bikers! @transalt

Transportation Alternatives released a report in 2014 with recommendations for improving Jay Street, which included adding a two-way bike lane on the west side of the street north of Tillary Street (including the section between York and Prospect). Removing the dedicated lane altogether, even on such a small stretch, will likely make it dicier to bike on Jay Street.

"Safety always trumps parking," said Transportation Alternatives Director Paul Steely White on Thursday. "Jay Street — if they want to make it two way that's great, I think that will increase accessibility for everyone. But they should find room for a protective bike lane and reapportion the street accordingly, taking parking if necessary to ensure cyclists' safety."

This is proof that @NYC_DOT doesn't understand Vision Zero. The core premise is sacrificing speed for safety, not the other way around!

DNAinfo reports that on Tuesday night the DOT said it might consider adding a dedicated lane to the west side of the street, which runs uphill, but would have to look at how doing so would affect available parking. DOT did not comment on Thursday on the likelihood of such an addition.

#bike lanes
#bqe
#brooklyn
#dumbo
#jay street
#vision zero
Do you know the scoop? Comment below or Send us a Tip