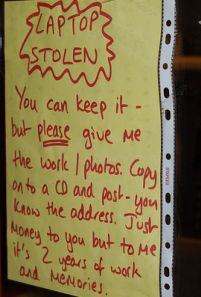 A Westchester woman who had her laptop stolen didn’t even bother with old fashioned signs like the one pictured here – instead she remotely used the camera in her computer to photograph the culprits. The laptop was stolen from her apartment on April 27th along with $5,000 worth of other electronics.

The Journal News has it that the unnamed woman got a call from a friend on Tuesday asking her if she was online; she wasn’t, but her stolen computer was. So the victim signed onto another computer and used the "Back to My Mac" program to confirm that it was in fact her stolen laptop being used to surf the Web.

She was then able to use the stolen computer's camera to photograph the suspects, two Bronx residents in their ‘20s. She didn’t recognize the men, but her roommate did – they had attended a party at the apartment a few weeks before the burglary. White Plains police later arrested the duo, recovering most the stolen goods and generating another useful plot device for Law & Order screenwriters.

#back
#camera
#laptop
#mac
#my
#online
#photgraph
#photo
#picture
#rob
#robbed
#stolen
#thieves
#westchester
#woman
Do you know the scoop? Comment below or Send us a Tip