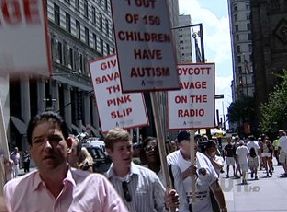 Last week conservative radio host Michael Savage blathered on air about every child with autism being “a brat who hasn’t been told to cut the act out,” and today is still standing by his remarks, which were plentiful and included calling the disease “a fraud and a racket.” The NY Times noted that Savage's audience "ranks in size behind only those of Rush Limbaugh and Sean Hannity," and you can bet all of those listeners--and then everyone else who hears about this--have opinions.

Yesterday a group of New York autism advocates were calling for his termination at a protest in front of WOR 710 AM, which airs his show locally. They gathered on lower Broadway holding signs that said: "Fire Savage." Meanwhile, Savage stood by his remarks saying that "there is no definitive medical diagnosis for autism” but it's an epidemic created by "greedy, corrupt medical/pharmaceutical establishment." It was during his July 16th broadcast that he stated “99 percent of the cases” were due to lax parenting and the kids needed to be told "don’t sit there crying and screaming, idiot."

Last night he claimed his remarks were "taken out of context." One protester, Evelyn Aim -- a spokeswoman for the National Autism Group, is one of many speaking out, and said: "I would trade my son being autistic for being a brat any day." And while the company that syndicates his program (Talk Radio Network) hasn't commented yet, WOR simply said, "The views expressed by Michael Savage are his views and are not those of WOR Radio. We regret any consternation that his remarks may have caused to our listeners.” The AP poined out that Savage's "brief MSNBC show was canceled after he told a caller he should 'get AIDS and die, you pig."

#autism
#host
#Michael Savage
#protest
#radio
Do you know the scoop? Comment below or Send us a Tip