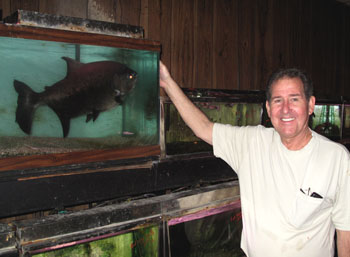 "Big fish eat little fish," says the wisdom of the city. Meet Buttkiss, the black pacu who has eaten more than 175,000 fish during his residence in Queens. “We feed him twenty-five goldfish every other day,” says Steve Gruebel, the owner of Cameo Pet Shop in Richmond Hill. You do the math. He’s been in the shop continuously since 1970, becoming a Richmond Hill landmark in that time.

Why hasn’t he been sold already? “We actually sold him in 1968 to a Holocaust survivor named Kurt Emerick. The fish was about two inches long at that time. But he got so big he was knocking things over in Kurt’s fishtank. Kurt didn’t like that. He was a perfectionist. So he brought him back here in a bucket. Later Kurt got hit by a bus on Metropolitan Avenue and died. But the fish is still here. I had just gotten back from Nam and I decided to keep him.”

The fish has some personality too. Named after the famed linebacker Dick Butkus (though Steve corrected my spelling to "Buttkiss"), he will come to Steve's hand because he knows that's where the food comes from. “You can see the marks on the top of his head. He’ll bang on the top of the tank when he’s hungry.”Pacus are in the piranha family. The New York Aquarium did not get back to us when we asked whether or not the fish could possibly be that old, but residents of Richmond Hill swear the fish has been there the whole time, in the same 75-gallon tank. When I walked around the block to go to the (excellent) Alfie’s Pizzeria, Louie, Alfie’s son, said, “That fish! That fuckin’ fish! Is that fuckin’ fish unbelievable or what? When we’re all dead and gone that fish will still be there.”