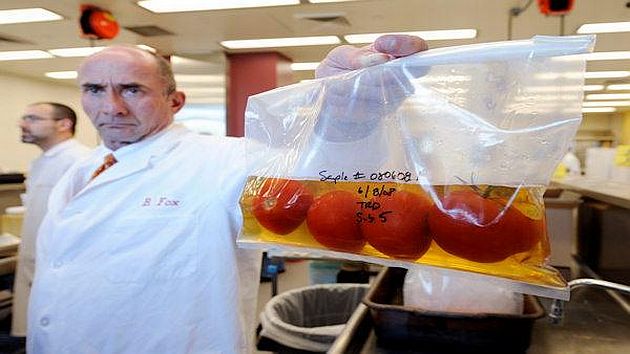 An FDA official brandishes a bag of tomatoes being tested for salmonella. AP Photo/Kevork Djansezian

As if mocking the inadequacy of federal investigators, a ruthless army of salmonella-tainted tomatoes continues to sicken Americans, and the FDA seems utterly helpless to pinpoint the source. Frustrated officials all but admitted that the trail had run cold yesterday, and the agency's food safety chief, Dr. David Acheson, told reporters “maybe we were being too optimistic” in earlier statements about cracking the case.

New York City officials reported the city's first salmonella illness yesterday; it occurred sometime before June 1st. But the Centers for Disease Control and Prevention released no details on the individual, and it’s unclear whether this contradicts earlier FDA assurances that New York tomatoes are safe, or if the resident was simply sickened by out-of-state tomatoes. The number of people made ill from the outbreak soared to 228 yesterday, as 61 previously unknown cases came to light. At least 25 people have now been hospitalized, and the FDA said that salmonella may have hastened a cancer patient’s death in Texas.

The FDA attributes the salmonella outbreak to uncooked red tomatoes of the plum, Roma, and round-grown varieties. Officials still maintain that cherry and grape tomatoes, tomatoes sold attached to the vine, and homegrown are safe for consumption; that determination is based on assurances from victims that they did not eat these varieties of tomatoes. And today the Times checks in on the FDA’s long overdue food-safety plan, which has left some lawmakers very underwhelmed.