"Traffic violence is a preventable public health crisis and Whoopi Goldberg is misusing her huge megaphone and sharing incorrect information," said Amy Cohen, whose 12-year-old son Sammy Cohen Eckstein was killed by a driver in 2013. "She went on the air and was disparaging about the solutions that save lives."

Goldberg, the Oscar-winning actress and a host of The View, spent much of an interview with Mayor Bill de Blasio last week complaining about bike lanes and traffic-calming measures like pedestrian medians and how they impacted her driving. Goldberg, who resides in New Jersey, told the mayor, "I come in every day, I come in every day, and I find that because you can’t make a turn anywhere, you can’t go straight anywhere. When there is a storm, people can’t move anywhere, because you got all these medians in the way, and I’m just saying you might want to take a look at some of this. Because now you have Cuomo coming in talking about congestion pricing, and I kind of feel like it’s a set up."

"We want people to be informed and knowledgeable about what's true and not view the city through their individual comfort levels," Mary Beth Kelly said. Kelly and her husband Dr. Carl Henry Nacht were biking on the West Side's Hudson River Greenway in 2006 when an NYPD tow truck driver allegedly failed to yield to them and fatally struck Nacht. On Tuesday, Kelly pointed across the street to the building where Nacht used to practice medicine.

"This about suffering that thousands of New Yorkers have had to bear because a loved one has been killed or because they have become seriously injured," Kelly, a founding member of Families for Safe Streets, continued. "We have members that will never walk again, that have traumatic brain injury, who will need medical care for the rest of their lives. It's a public secret as anthropologists would say—it's happening all around us but no one's talking about it." 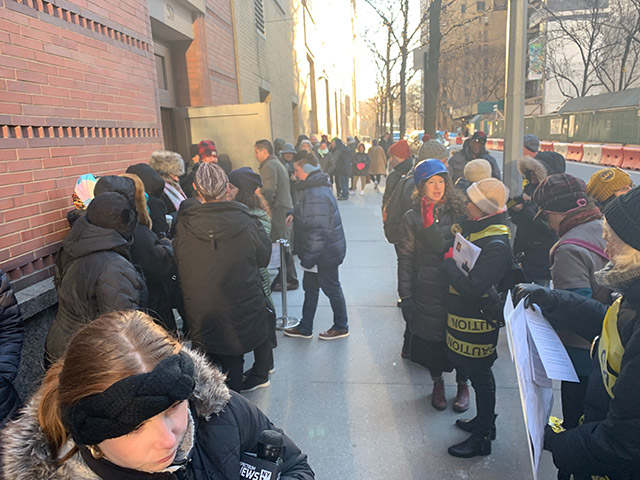 Audience members for The View on the left, Safe Streets advocates on the right (Jen Chung / Gothamist)

Audience members for Tuesday's show watched the protesters while waiting on line to enter the studio. Many were tourists and declined to speak to reporters, but listened sympathetically the safe streets advocates. One audience member mentioned her relative was a victim of a hit-and-run in Somalia and thought that the issue was important. Meanwhile, as protesters were also giving interviews to the media, security for The View yelled repeatedly for them to move and clear the sidewalk.

On Saturday, Goldberg Tweeted in response to those upset by her comments:

(1/4)I’m heartbroken to hear that my conversation with the Mayor about bike lanes may somehow have led people to believe that I am against them, which is not the case. As I said to the Mayor, I think bike lanes are great and necessary. However, while the actual lanes make sense,

(2/4)it’s the medians and cement islands that accompany the lanes that are the issue for me. They are not set up well and create dangerous situations for pedestrians, drivers and the bikers. I also think that if you are going to have bikes for people to ride, you should have

(3/4)helmets, just like we do for our kids when they are riding their bicycles. I believe the Mayor understood what I was saying. I want to make sure that everyone on the roads can move safely.

(4/4) My heart goes out to any family that has had to go through the loss of a loved one in a cycling accident.

While the advocates appreciated that Goldberg heard them, they didn't see the Tweets as an apology. Dana Lerner said she and others were "disturbed" by Goldberg's original remarks. Her 9-year-old son Cooper Stock was holding his father's hand as they crossed the street when a taxi driver fatally struck him five years ago; the driver was just fined $580. "We just want to have the opportunity to talk to her and give her the facts," Lerner said. "So she can be a spokesperson to help saves lives. Two hundred people a day are injured in New York City... pedestrians should have the right of way. People who are driving should have to pay attention, go slowly—and there has to be protected bike lanes."

The group, including Raphael Munoz, whose brother and mother were both killed by reckless drivers, also pointed out that black and brown New Yorkers were "three times more likely to be killed in a traffic crash."

Then they walked around the corner to Central Park West to see the Ghost Bike honoring Madison Lyden. Lyden, a 23-year-old tourist from Australia, was biking north when a livery cab swerved into the bike lane in front of her, forcing her to swerve into Central Park West, where an allegedly drunk truck driver struck and killed her. 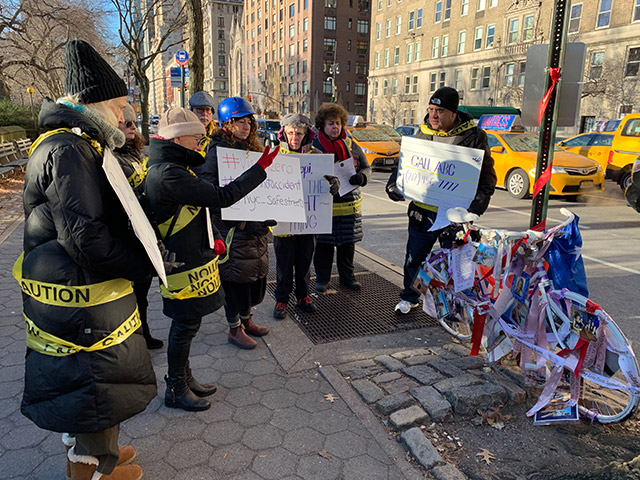 Noting that more people are killed by cars than by gun violence, Kelly said "We have to raise awareness and have people talk about it and understand why Vision Zero and street redesign for key for solving this epidemic."