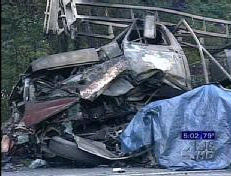 Some more sad details about the Tuesday car crash in Virginia that claimed the lives of six people, five of them believed to be siblings in a Bronx family of Trinidadian immigrants. The fire destroyed the Honda Accord so badly that mother Pamela Ramharrack of the Bronx was asked to go to Virginia to identify the bodies, but she was only able to identify her 13-year-old son Anderson. She must gather more dental records to identify her other children, Putrina, 24; Anthony, 21; Emmanuel, 16; and Jessica, 11; their surviving sister, Salena, provided DNA samples. It's believed the sixth passenger was a family friend.

Police suspect that Putrina Gopaul had been driving on U.S. 58 in Suffolk, Virginia, when she lost control of the car. Marshall Williams, who had been right behind the Accord, told WABC 7 the Accord was going too fast and the driver may have fallen asleep when it crashed into an industrial rig. He said he tried to free the passengers but not many other drivers who stopped helped. "The biggest problem was a lot of people wanted to spend a lot of time taking pictures with their cell phone than trying to get fire extinguishers and help."

A cousin told the Trinidad Express that the bodies cannot be handed over until the police are finished with their investigation. Yasmin Mohammed-Mills said, "While packing her clothes to make the trip to Virginia, [Ramharrack] was crying uncontrollably. Since the accident she has been busy organising the children's medical and dental records. Now for the authorities to tell her she has to wait as much as three weeks before she can bury her children, it's too much for her to bear."

Another relative said that the family was returning from a trip to North Carolina - to obtain cheaper car insurance. The family's neighbors have created a makeshift memorial in the Norwood section of the Bronx. Eleven-year-old Caroline Mendez told Newsday she had placed with Jessica last week, "We always played out there all the time. She had more time to live."