Authorities have released the identity of the 18-year-old victim of a sick internet broadcast as Rutgers freshman Tyler Clementi, a talented violinist. Two other freshmen, Dharun Ravi and Molly Wei, have been accused of invasion of privacy for broadcasting a hidden-camera video of Clementi during a sexual encounter on the Internet, which allegedly led to Clementi's suicide last week. He reportedly wrote on his Facebook page on September 22nd, "Jumping off the gw bridge sorry." His family released this statement:

Tyler was a fine young man, and a distinguished musician. The family is heartbroken beyond words. They respectfully request that they be given time to grieve their great loss and that their privacy at this painful time be respected by all. The family and their representatives are cooperating fully with the ongoing criminal investigations of two Rutgers University students. 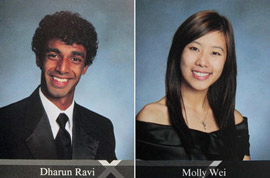 called the alleged spying "extremely obscene," while another said, "I mean we all live in such close conditions with each other, it’s like breach of privacy…I think it’s gross." According to Ravi's Twitter account, which has since been deleted, Clementi asked Ravi to have the room to himself on the night of September 19th. Ravi then set up his webcam and went to Wei's room, where he watched the feed and saw Clementi "making out with a dude." Student Tiwa Adediji said, “It's my dorm. It's my private space. I expect...my privacy to be respected and to be able to do whatever I want. There should be no one there invading my privacy."

Police have not yet found a body in connection with Clementi's suicide, but Ridgewood high school (Clementi's alma mater) principal John A. Lorenz told parents, "We have been informed by a family spokesperson that Tyler Clementi, Class of 2010, has been reported missing. We remain in contact with the family and law enforcement agencies and will keep you informed as we receive updates." Clementi's RA, Daryl Chan, said, "His roommate was a very tech-savvy-type dude. He set up cameras all over the room and didn't tell him. A lot of the RAs are troubled by it."

#dharun ravi
#invasion of privacy
#molly wei
#rutgers university
#suicide
#tyler clementi
#voyeurism
Do you know the scoop? Comment below or Send us a Tip