After three weeks off from league play, the Red Bulls—and a reported 700 local supporters—rolled down New Jersey to take on the Philadelphia Union to resume their MLS campaign. For a team that had made "no excuses" their mantra this week, the excuses piled up quickly, as a Conor Casey brace helped hand NY a 3-0 loss that some are calling the worst outing of the season. The loss drops them to third place in the Eastern Conference heading into the second half of the season.

Conor Casey terrorizing a Olave-less defense. Jamison Olave, missing the game thanks to his red card back on June 1st, remains one of the league's best defenders. With a huge physical presence and a good understanding with Markus Holgersson, he's cemented the Red Bull back line repeatedly throughout the year. But without him, Holgersson and Heath Pearce are left to try to hold the back line instead - and for whatever reason, they just don't seem to click with each other.

Against a physical forward like Conor Casey, that'll spell defeat. Casey had a goal ruled offside in the opening minutes, but would connect in the 7th to open the scoring. In the 63rd, he gobbled up a spilled ball from Luis Robles and without any real pressure from the defenders, easily made it 2-0.

Lloyd Sam getting sent off. In the 28th minute, Lloyd Sam attempted to run on a ball as Danny Cruz came in for a tackle. But Sam, being in a full run, ended up stamping Cruz's ankle with a cleat. Intentional or not, referee Baldomero Toledo showed Sam a straight red card and left the Red Bulls down a man for just over an hour of the match.

Henry having to drop deep in 2013. With Sam off, we were treated to an old sight of Theirry Henry opting to drop deep to collect the ball and bring it forward, rather than staying up top and trying to score. Those who have watched Henry's time with New York will recognize this is not an uncommon occurrence - he's done it routinely when he feels he isn't going to get the service he needs to score on his own.

But unlike 2011 (when he had Luke Rodgers to bang in goals) or 2012 (where Kenny Cooper played the target role to perfection), Henry only had Peguy Luyindula - and late in the match, Fabian Espindola - as his targets to feed the ball to. Neither have shown the same knack for getting where Henry wants to play the ball, and so Henry dropping deep was a net negative on the night.

No shots on goal for NY. Not a one. Philly managed nine attempts on goal, but RBNY could not challenge Zac "Scores Own Goals With His Face" MacMath even once. It's very hard to score if you don't kick the ball towards the goal, so we have to assume Peguy Luyindula and Fabian Espindola were trying to will the ball in with their minds.

Luis Robles. For every good save Robles made at PPL Park—and he had some beautiful—there seemed to be a poor save, one that always seemed to land near the feet of a Union attacker, including Casey's second. The defense did him no favors, but it was a brutal performance from the goalkeeper that, mysteriously, was leading fan voting for the All Star Game earlier this week. Ryan Meara is healthy, and Kevin Hartman is surely in form by now - so the only thing keeping Robles between the pipes is the coach's decision. A performance like this one might lead to a switch. 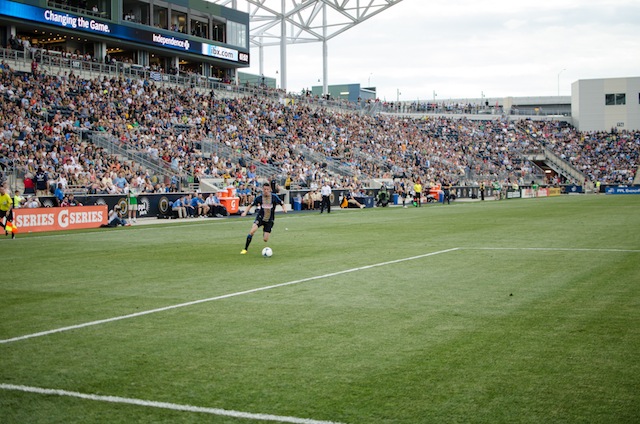 What's missing from this picture? (Pablo Maurer for Gothamist)

The player absences that hampered the game were temporary. Beyond Olave, the team was very clearly missing Tim Cahill and Juninho in midfield. Juninho was out due to suspension for yellow card accumulation, while Cahill picked up a reported groin strain finishing out Australia's world cup qualification campaign. All should be back for the next match against Houston - although Lloyd Sam will be obviously unavailable, barring an appeal of his red card.

Heads didn't go down after Sam went off. The team generally acknowledged after the game that there was no way back after going down to 10 men while already down a goal. But it's worth considering that the team had more fight and more of the ball after Sam got sent off. Unlike when Olave's red card against Vancouver lead to the team's self destruction, New York stayed in this match much more than the score line might suggest.

Traveling support was strong. Credit and respect to the 700 fans who traveled on Viking Army or Empire Supporters Club buses only to watch their team get blown out.

The eye-searing orange of the Houston Dynamo will visit town for their first match of the season with New York. Houston are winless in their last six, and have generally been poor on the road, so this will be two struggling sides looking to make amends. With New York back to full power in front of what's expected to be a full house, conditions will be as good as any for the Red Bulls to get back in the winning column.

Mike Petke on getting killed: "The red card obviously killed us. Ironically, I thought we played some of our best soccer movement-wise, getting out of the back to the final third when we had ten men at some points in the second half, which is hilarious to me. But the red card killed us. I think what also killed us is—we did so well, a lot of it revolved around Thierry dropping because we were a man down. Getting the ball, turning, good combinations, getting into the final third. Either we miss, save, or make a bad pass, and then they're right down our throats, and when you're a man down that'll kill you."

Thierry Henry on the match: "It's one of those, when you lose, you kind of see the courage of the team. Although we lost 3-0, the guys were still trying. Markus was coming up from the back with the ball, trying to push the ball forward. Dax and I were trying to do the same thing. I thought that we created, for a team playing with ten men and playing 1-0 down, I thought we created a lot. Having said that, we're going back home with a defeat. I don't think it was as bad as the score will tell you."

Lloyd Sam on his red card: "The ball was in front of me I'm not really sure how to go for that ball, but I would like to see the replay, until then I can't really say...I felt I let my team down. It was already a tough game with 11 so that wasn't easy."