If you were wondering what a selfie taken from one of the Brooklyn Bridge towers looks like, here you go! Russian tourist Yaroslav Kolchin shared his pictures with the Daily News, admitting, "It was beautiful. It was the best point to look and enjoy (the view)." Totally worth getting arrested!

As you can see from the image, Kolchin manages to capture the Manhattan skyline, the bridge's Manhattan towers and his peace sign. He also took photos of his sneakers enjoying the view, his walk up the cables and a cop who came to apprehend him. Kolchin reiterated that the Russian police don't care about stuff like this, declaring, "In Russia, this is normal thing to do. I was a little bit scared, but it was my last day in New York. I want to save memories of my trip and take beautiful pictures." But didn't the fact that the door up the cable was locked suggest that the area was off-limits?

The August 24 stunt was an embarrassment to the NYPD, which was already reeling from the German artists who swapped the flags atop the Brooklyn Bridge towers for bleached out flags in July. Kolchin was finally allowed to leave New York City last week, when a judge accepted his community service work. 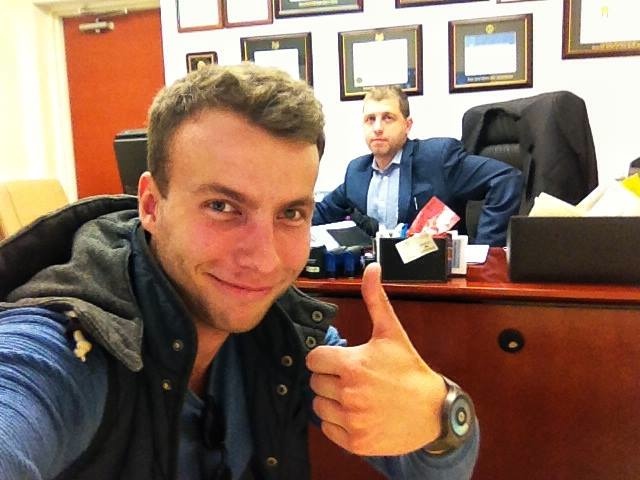 Kolchin explained on his Facebook page (translated), "I pleaded guilty only on one [charge], oddly enough, prohibiting the entry of the bridges. :) To prove innocence and on it would be tantamount to saying that 'it was not me, you got me confused with someone else.'" Which would have been impossible since there's video of him on the bridge.

#brooklyn bridge
#Brooklyn bridge trespassing
#selfie
#Yaroslav Kolchin
Do you know the scoop? Comment below or Send us a Tip