Apparently being a movie star means you're totally ignorant of news reports that clearly state hoverboards can explode, prompting their removal from Amazon and major airlines. Reliably surly actor Russell Crowe tried to Twitter shame Virgin Australia for not allowing his sons to bring their hoverboards on a plane—and it backfired spectacularly, much like a flaming self-balancing scooter.

Ridiculous @VirginAustralia. No Segway boards as luggage? Too late to tell us at airport.Kids and I offloaded. Goodbye Virgin. Never again.

.@VirginAustralia I'm awaiting your reply, where is your duty of responsibility in this? Why not tell me when I am booking my ticket?

Virgin Australia had responded to him. Twice:

@russellcrowe Hi Russell, due to safety concerns over the lithium ion batteries in hoverboards, these have been banned on all major... 1/3

@russellcrowe ...Australian airlines and many around the world. We're sorry you were not aware of this prior to check-in today. We... 2/3

@russellcrowe ...hope to see you on board again soon. 3/3

@russellcrowe Hi Russell, this information is outlined in the Dangerous Goods section in the booking confirmation and check in... 1/4

@russellcrowe ...reminder emails you will have received. We have also communicated this on Facebook and Twitter, as well as... 2/4

@russellcrowe ...through the media. We understand your frustration, however please appreciate that safety is our number one... 3/4

Some Twitter users tried to point out that it's a safety thing:

@shark_avenger @russellcrowe @VirginAustralia I'd much rather fly knowing that there's no chance of a fire on board. I'm with Virgin.

@russellcrowe yeah... They have a tendency to explode. Should be thanking @VirginAustralia for keeping your family safe.

@russellcrowe @VirginAustralia Lots of airlines have done as lithium batteries have been exploding. Been on news a lot. Sorry, mate.

@russellcrowe It's only in the terms, their website, at booking, on your confirmation and the email they sent you. pic.twitter.com/Uq3k97aVo9

Anyway, Crowe tried to dial it back, explaining he's just like the rest of us:

.@joelcreasey @VirginAustralia I'm a father Joel, with two kids at an airport , trying to start our holiday.

In a perfect world, Crowe will take his family to NYC, spend thousands on hoverboards for everyone, then run right into the NYPD. 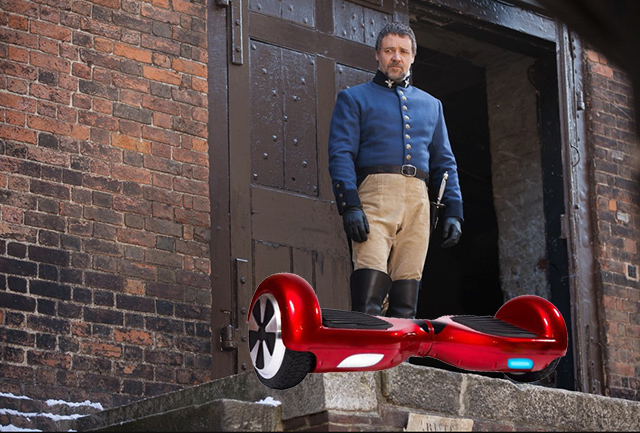 #exploding hoverboard
#hoverboard
#plane
#russell crowe
#self balancing scooter
#virgin australia
Do you know the scoop? Comment below or Send us a Tip