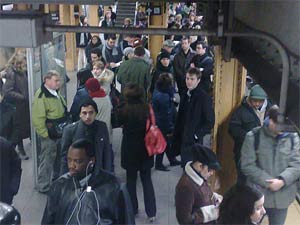 amNew York reports that the train had a mechanical failure close to First Avenue, requiring a rescue train to be dispatched to pick up passengers. Some passengers from the stranded train said "that four men exited the stalled train, intending to walk through the tunnel to the next station. They said two men soon returned to the train, saying it was too far to walk. The other two men apparently kept going." We bet the guys who returned ran into some rats in the subway.

The delay took about two hours to resolve. This comes just in time for the NYC Transit Authority's reorganization of subway train management, where subway lines will get their own managers. Starting Monday, the 7 and L lines will start the program; the 7 train will be managed by 26-year NYCTA veteran Lou Brassica and the L will be headed by 28-year vet Greg Lombardi.