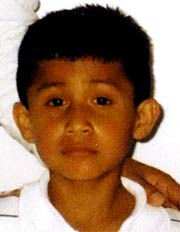 A boy riding his scooter on Bleecker Street between Central and Wilson Avenues in Brooklyn was killed after two cars struck him yesterday. Christian Acetopan, who would have started first grade this week, was pronounced dead at the scene.

Around 5:20PM, a red Mistubishi Eclipse ran down Christian, who was with his brother (also on a scooter) and mother. A witness told the Daily News said the boy "was in the street riding the scooter. He tried to get away when he saw the car, but the car hit him." The driver then "stopped, he looked and kept on [going]"; the police arrested the suspected driver this morning.

Then a Toyota Rav4 minivan ran over Christian. The minivan's driver stopped and the Times says that driver will probably not be charged. A witness recounted to the Post, "The first car hit him, lifted him up, and he crashed down into the street.. The second car that hit him didn't even see it." And his brother Edgar, who was not injured, was crying in the street, trying to put Christian's helmet back on his head.

Christian's mother, described as a single mother who works six days in a factory, was taken to the hospital for observation. A friend said that she couldn't afford the scooters but had "scrimped" and saved to get them for her boys.

#bleecker street
#brooklyn
#daily news
#hospital
#news
#News: NYC
#police
#The Police
#this week
Do you know the scoop? Comment below or Send us a Tip