Rumor: Rudy to Radio (Can We Ask About Ferrets?) 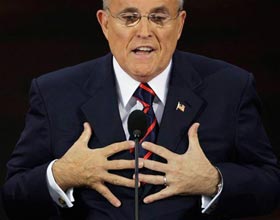 If you believe Page Six, then you might believe that Rudy Giuliani may be headed to the radio. Bill O'Reilly is going to be ending his radio show to focus on Fox News, so... "Now, Page Six has learned the leading candidate to succeed him is Rudy Giuliani (above). Westwood One, which syndicates the O'Reilly show, is negotiating with the former mayor."

And no mention of Rudy and radio can go without referring to his unforgettable rant against a caller to his weekly mayoral radio show. The caller, David from Oceanside, was an advocate for ferrets, unhappy that ferrets were deemed illegal by the Department of Health. Giuliani said to him:

Here's the full transcript and there's audio after the jump. And here are some more moments in Rudy-vs.-the-public hall of fame.

#bill o'reilly
#ferrets
#page six
#radio
#rudy giuliani
Do you know the scoop? Comment below or Send us a Tip